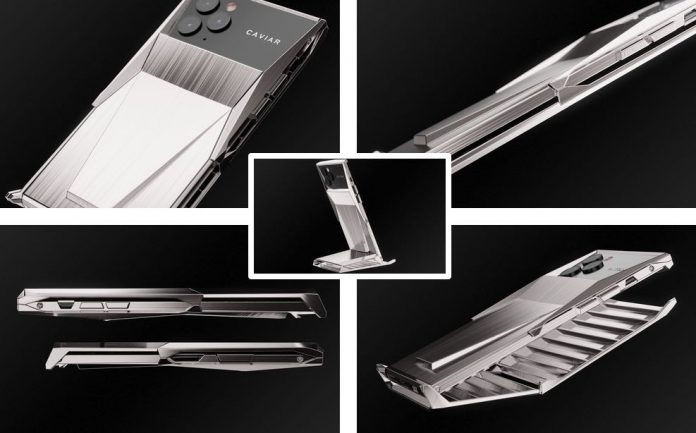 Russian luxury brand Caviar has unveiled a new and expensive custom iPhone 11 Pro. In recent months, the company has focused on diamonds and gold phones. But the brand has now turned its attention to the Tesla Cybertruck.

Caviar has unveiled a custom iPhone 11 Pro that has a similar design to the futuristic Tesla truck. The unique design is found on the back of the phone, which also has a similar color option to the truck from Tesla.

Caviar has named it the Cyberphone, which is based on the iPhone 11 Pro and iPhone 11 Pro Max. The back of the phone has that design that makes the Tesla truck different from any other truck. The design is made out of titanium and the screen is also covered by a plate from the same material.

The plate can be flipped, allowing it to be used as a kickstand. The material and plate make this a strong phone. Smartphones are fragile and usually suffer heavy damage when dropped. The plate and titanium on the back make this phone much stronger than the regular editions from Apple.

This is a Caviar release so the price won’t be anywhere near any other smartphones. Caviar has confirmed that it will only make 99 units of the Cyberphone. The brand has announced that the starting price for the 64GB iPhone 11 Pro is $5,265. The Max version or a phone with more storage costs more.

The Tesla Cybertruck was announced last year, going viral for that one moment. The Cybertruck caught the attention of people for its different design but some also remember it for the incident involving its CEO and the windows.

During its presentation, the windows were said to be strong enough to withstand impacts from things such as steel balls. Tesla CEO Elon Musk threw a steel ball at the window but it ended up shattering.

The moment went viral and it was later explained that the reason for that was maybe because the doors were smacked with a sledgehammer before the event. The impact was said to have cracked the base of the glass, which explains why both windows were shattered by the steel balls. Musk later revealed that the truck had received 200,000 pre-orders.

Caviar closed 2019 with several custom announcements, including some that were extremely expensive and rare. In November, the brand introduced a pair of Gold Apple AirPods. The Apple headphones are wrapped in 18-karat gold.

Caviar announced that the headphones have a price of $67,000. The brand also revealed that it would only be selling one unit, making them extremely rare. A few weeks later, the brand introduced the Christmas Star collection, which features three Apple iPhones.

Half of the phone is decorated with a gold design that illustrates Jesus Christ’s birth. The Christmas Star Collection is one of the most expensive at the moment since one of its editions has a starting price of $129,080.

The brand introduced a number of expensive phones and accessories throughout 2019. Among the other expensive products are the Galaxy Fold Game of Thrones phone, two iPhones featuring fragments of the Titanic and the Vostok-1 spacecraft, and the super rare and expensive Gold Apple AirPods.