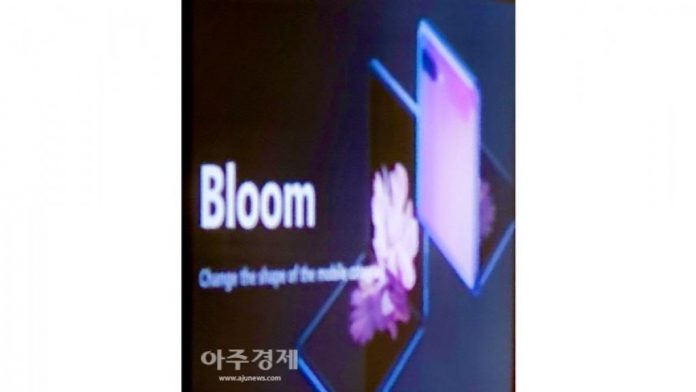 Samsung recently released the Galaxy Fold but it appears that the company is wasting no time in making another foldable phone. The Galaxy Fold hasn’t even debuted in some markets but a leaked image has now shown what could be the company’s next foldable release.

The leaked image comes from CES 2020, an event where companies usually bring their upcoming products. Tech news site AJU News posted the image that is believed to be from a Samsung presentation that was not public. The blurry image shows the word ”Bloom” next to a foldable device.

What’s interesting here is that the image shows a much different design from the Galaxy Fold. The device seen there has a similar design to what the new Motorola Razr has. The image does match the rumors that have been going around for the last few months.

In late 2019, it was rumored that Samsung would do something different for the Galaxy Fold 2. The difference would be the clamshell design, which has been rumored for other foldable phones as well.

It is unclear if the device is going to be called Galaxy Bloom or if this is just a codename that the company is currently using. BGR reports that the leaked image shows a render and earlier leaks believed to be a prototype phone. This suggests that the device could be much different when the company officially announces it.

Companies Could Be Working On Similar Design

Motorola is currently the only company that has a foldable phone with that design. Recent rumors have mentioned that companies such as Xiaomi and Samsung could follow with a similar design. The new Razr was coming this month but the phone was delayed due to high demand.

The Razr has a price of $1,499 so that would make Samsung’s next foldable device $499 cheaper. Nothing has been confirmed so we’ll have to wait for Samsung to make an official announcement next month or whenever it plans to announce its new foldable phone.

MWC 2020 will take place next month and we’ll likely hear more on foldable phones there. Competitors such as Huawei and TCL have recently confirmed new foldable devices. Huawei has even confirmed that the upgraded version of the Mate X will be at the tech event, which begins in late February.

What do you think of the rumored design? Are you planning to purchase a foldable phone? Let us know in the comments.