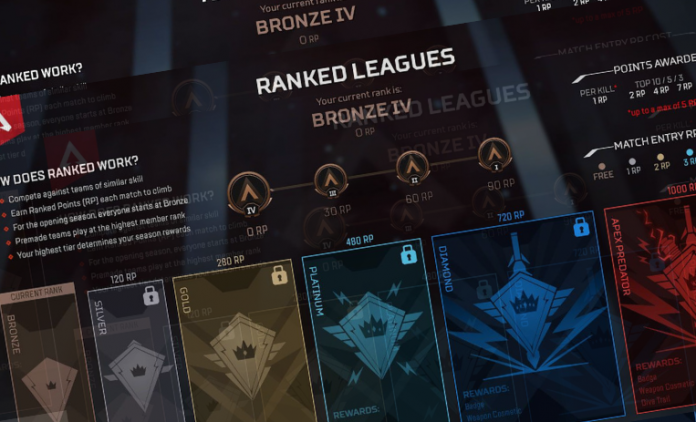 Respawn Entertainment is planning to punish those who are cheating the system by abandoning Apex Ranked matches. Respawn senior system designer Eric Hewitt revealed that the company knows about the issue and can see the players who use it to climb the rankings and make it to the highest rank, Apex Predator.

Apex Legends currently features two game modes, Play Apex, which is a normal match, and Ranked, a much more competitive mode in which points are at play. The Ranked mode allows players to climb the rankings if they earn enough points.

The mode, added back in Season 2, gets tougher and tougher in the highest rankings, Diamond and Predator. Those in Diamond and Platinum have to play well as a loss early in the game means negative points.

Some players have found ways to cheat the system by not losing any points. This is nothing new to Apex since there have been cheaters from the start. The issue that Respawn is talking about is the dashboard, which is something the players use when they lose early or know they will be losing points from that match.

Ranked is all about losing or earning points so this is a big issue since players cheating the system can simply keep playing and dashboarding until they get where they want. Dashboarding does not make them lose any points so some players have started using this to get to Apex Predator, one of the ranks that earns rewards for players.

Dashboarding is an issue on all three platforms, according to reports. On PC, players are reportedly closing the game before the match is over. This confuses the system and doesn’t remove any points from them.

The news that Respawn is planning something for the cheaters came from a tweet made by an Apex Legends player. The person was asking how to report someone dashboard quitting and Hewitt responded to that tweet by saying this:

hey, no need to report it manually, we can see it on our end. Judgment Day will be coming 🙂

There is no exact date on when the game developer will take action but he did say that things will be handled soon. It is unclear what the punishment will be for those players caught cheating the system but it could involve rank resets and bans.

The news have led to all sorts of discussions on Apex Legends reddit pages. Some players have even mentioned that this could even end up helping the cheaters since a rank reset would drop them all the way to the first rank, Bronze. Bronze is usually filled with new players or people that are coming back to the game, making things a lot easier.

Respawn deciding to ban those dashboarding could leave them out of the game completely. The game developer is no stranger when it comes to taking action. Early on, it banned thousands of players for cheating. Back in 2019, it was reported that the game developer had the idea of matching up spammers and cheaters, preventing them from ruining the experience of those playing fairly.

Speaking of Apex, the game is coming up with a new event that will start in just a few days. The event will bring a total of seven new limited time modes, including Gold Duos. The game is also adding skins and cosmetics that players can purchase during the event.