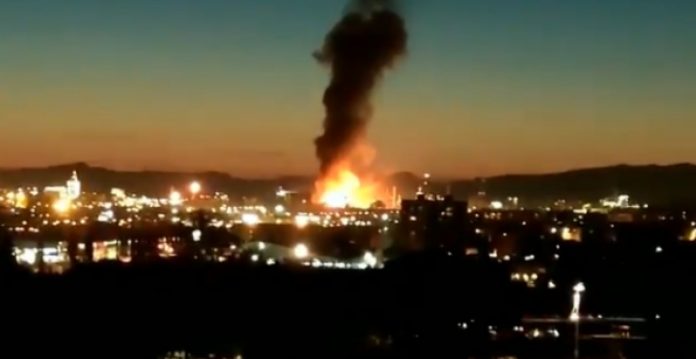 A chemical plant explosion in Spain has left one man dead. The death did not occur in the area though, the man was instead miles away doing something else when the explosion sent a large metal plate into the air.

The man was in his apartment when the large metal plate struck the building. The BBC reports that the plate weighed one ton. The metal plate caused part of the building to collapse, according to officials.

The explosion happened at around 18:40 local time in La Canonja. Authorities are still investigating but have said the explosion probably came from a chemical accident. No toxic substances made it into the air but it was confirmed that two employees lost their lives in the explosion, which sparked a fire in the factory.

Witnesses described seeing a large object flying through the air and hitting the building. The plate caused damage to the building and one resident told the El Pais newspaper that it was like a bomb.

Metal Plate Was Seen By Residents

Some residents of the Placa Garcia Lorca area, where the man lost his life, described seeing a ball of fire going through the sky around the same time as the incident. Firefighters later confirmed that the ball of fire they saw was the metal plate that was launched by the explosion from the factory.

Officials tweeted pictures of the factory shortly after the explosion. One picture showed the factory still on fire while a video showed it during the early hours of the following day. The video shows teams spraying water to the tanks.

Emergency services told residents to stay indoors after the explosion started a fire at the factory. Local media tweeted a picture of what appears to be a firefighter looking at a metal plate inside of an apartment.

The explosion sent other parts flying through the air. A piece of machinery, which appears to be very heavy, was found in a field nearby. Dozens of firefighters were in the area on late Tuesday and early Wednesday to control the fire at the Industrias Quimicas del Oxido de Etileno factory. Roads and public transport were suspended in the area after the incident. They were reopened on Wednesday.

Images of the explosion have appeared on social media. One of the images, which appears to have been taken from a car driving very far away, shows a cloud of smoke rising from a big fire. The materials used in the factory are said to be flammable.

Rescue teams launched a search in the factory and around the area shortly after the explosion. The teams along with search dogs found the body of the second victim. The victim was a senior staff member at the factory. They discovered the body in the early hours of Wednesday. The search was suspended on late Tuesday due to the dangerous conditions and poor visibility. The explosion left eight people injured, one of them died from injuries on Wednesday.