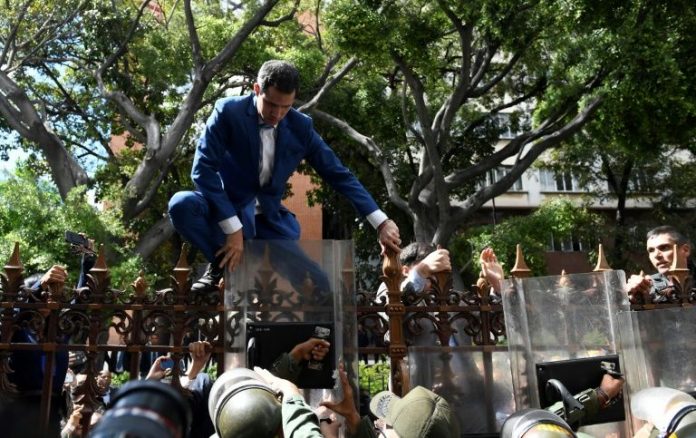 Opposition leader and interim president Juan Guaido was involved in a stand-off between lawmakers and security forces. National Guards who were standing near the legislative building attempted to stop Guaido and another 100 opposition lawmakers from entering.

Mr. Guaido and the opposition lawmakers pushed through and eventually entered the building. The incident comes just two days after he was prevented from participating in a vote where he was expected to be re-elected as Speaker.

Earlier today, Mr. Guaido showed up to the National Assembly along with several members of the opposition. The group made it clear through social media that it was going to show up to the building.

The group was allowed through several checkpoints before running into a group of police officers. A stand-off began but the group pushed its way past the guards and into the building.

The interim president later tweeted a video of the moment they pushed through. The video shows a small group of National Guards blocking the door before they fall back. According to reports, the incident forced lawmakers supporting the government to leave.

Mr. Guaido got to the Speaker’s chair and he was later sworn in. The BBC reports there was a power cut, which forced the group to use the flashlights on their smartphones.

This is the second incident that takes place in and outside the building in recent days. On Sunday, Guaido and several opposition members were not allowed to enter the building. During all of that, lawmaker Luis Parra was elected Speaker.

The opposition members who were not allowed to enter the building on Sunday held a vote outside and chose Mr. Guaido as the Speaker. Mr. Guaido was elected as Speaker last year and would later make world news after choosing to become interim president.

Mr. Guaido got the support of several countries after declaring himself as the interim president of Venezuela. The move came after the presidency was said to be vacant. Nicolas Maduro, who was the previous president, held a presidential election in early 2018 but the opposition and part of the international community did not recognize the results.

Mr. Guaido still has the support of many countries but Maduro refuses to leave power. He claims he is the president after winning the 2018 election. Maduro says the next presidential election will be held in 2025.

The opposition and part of the international community instead want a new presidential election without any of the current members of the electoral council, who have been accused of being in favor of the government.

Maduro’s refusal to leave power has brought more sanctions against them. Over the last two years, the US has announced several sanctions against officials and companies. The latest round of sanctions came in late 2019, with the US announcing that US companies were not allowed to do business with Venezuela.

Luis Parra, the opposition lawmaker who was elected on Sunday following the incident that left Guaido out of the building, said he had the votes to be elected. Mr. Parra was reportedly expelled from the Justice First opposition party over corruption allegations.

The US and several other countries have already announced their support for Guaido’s re-election. Recent reports say the US is considering a new round of sanctions. It is unclear what those could include.