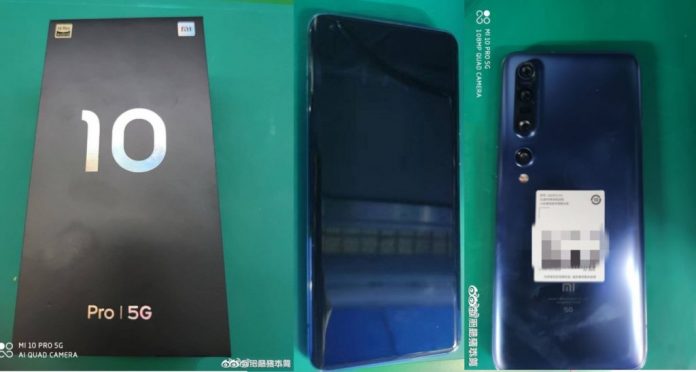 Xiaomi could announce the Mi 10 phones as early as next month but leaked images have given the tech world an idea on what the company is planning to unveil. In the past few weeks, there have been renders and concept images of the upcoming smartphones. But no live images of any device had surfaced.

That changed a few hours ago when leaked images showed just about everything from one of the phones. It is believed that the phone seen in the images is the Mi 10 Pro, one of the top variants of the lineup.

The leaked images show the device from different angles. The sides, the ports, and the back are all seen on the images. The most interesting part of the images is the back of the phone, which appears to have a total of four cameras. The previous release has a similar setup but this phone has one extra camera. The fourth camera is out of the three camera section while the flash sits under all four.

The device is shown in what appears to be a metallic blue/dark blue color option. Other images reveal the box that the phone might come in. The box keeps things simple with the number 10 in the front along with Pro and 5G at the bottom. The back of the box does not have its own image.

Charger and Front of the Phone

There are two more images that are quite interesting. One of them shows the front of the device, which has at least one selfie camera. It is difficult to see what else is part of the front but the phone appears to have a very large screen. The other image shows a 65W charger. GSMArena reports that this is in line with the rumors that said a few months back that the device would arrive with the fastest charging speeds ever for a Xiaomi smartphone.

The images don’t really show anything about the specs of any of the phones. But it’s been rumored for a few weeks now that the device will be equipped with a 108MP camera.

If the rumors are true, the phones will be launched just six months after the release of the Mi 9 Pro 5G. The device was one of the biggest releases of the company during the second half of 2019.

It’s been just four months since the release of the Mi 9 Pro 5G but it is not surprising to see Xiaomi preparing for a new launch since smartphone companies have big plans for early 2020. Let’s not forget that the company is also involved with the Mi Mix Alpha, which is a phone that’s quite different from the rest. The phone was delayed a few weeks back but it is expected to be released in the near future.

What do you think about the leak? Are you a fan of Xiaomi smartphones? Let us know in the comments.