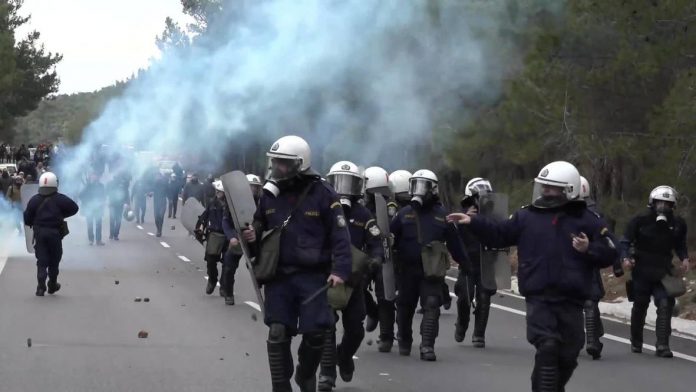 Plans to build new migrant camps have sparked clashes between authorities and protesters on the Greek island of Lesbos. Authorities responded to the protests by firing tear gas and rubber bullets.

The plans reportedly come from authorities in Athens who want to replace the old and overcrowded facilities with new ones. The facilities are located on Lesbos, Samos, Kos, Leros, and Chios.

The plans have run into some opposition from residents of those areas. The BBC reports that after weeks of talks between residents and the government, they secretly sent construction machinery and police officers to Chios and Lesbos.

The plans have sparked an opposition that intensified on Tuesday and Wednesday. Protests took place in several areas but reports say the biggest ones happened in Lesbos and Chios.

The situation got out of control during a protest in Lesbos, where a crowd tried to get to a site that is believed to be part of the plans. A police spokesman said the crowd had more than 1,000 people and claimed that some of them threw stones at police officers.

The protests began on Tuesday and intensified on Wednesday. In Lesbos, protesters gathered in the middle of roads and blocked the route with cars and objects. One of the roads leads to a construction site.

Greece has taken in many migrants during the migrant crisis that saw record numbers in 2015 and 2016. Hundreds of thousands have reached Greece off Turkey. Many of them come from Syria and other countries struggling with conflicts and poverty.

The record numbers have dropped over the last few years due to a deal between EU and Turkey. But people continue to arrive to the islands. The BBC reports that a total of 42,568 migrants are currently on the islands.

The plans are to build new centers since the current ones are said to be very overcrowded. The idea has not been welcomed by some residents. One camp on Lesbos currently houses around 19,000 people. But the refugee camp was built for less than 3,000.

In late 2019, Greece predicted the arrival of up to 100,000 asylum-seekers on its islands in 2020. In the previous six months, the country saw the arrival of 45,000 refugees, according to DW. During 2015, a percentage of the migrants used Greece as a crossing point to other European countries. But many of them are now held in centers across the five islands. The situation has overcrowded the camps in those areas.

The plans to build new centers are nothing new since it was something that was already being discussed last year. But the sudden arrival of police officers and construction machinery has sparked the protests in Lesbos and some of the other islands.