WWE WrestleMania 36 is a couple of months away and more and more leaks continued to surface on the match card we could see at the big event. The event already has some matches confirmed such as Drew McIntyre vs. Brock Lesnar for the WWE Championship. But what about the rest? A leaked Wrestlemania 36 card has given some interesting matchups that make a lot of sense. Here is everything from that leaked card:

Bray Wyatt vs. Roman Reigns (WWE Universal Championship): This match has been rumored for quite a while and if accurate, it means Goldberg won’t be leaving with the title when he faces The Fiend in the upcoming PPV.

Brock Lesnar vs. Drew McIntyre (WWE Championship): Drew McIntyre won his title opportunity after being the last man standing in the 2020 Royal Rumble. He recently challenged Lesnar for the title.

John Cena vs. Elias: John Cena and Elias have a bit of history, with Cena getting most of the wins and big moments. Cena is said to be making a return soon so this might be his next feud.

Kevin Owens vs. Seth Rollins: KO has been feuding with members of Rollins group. In last night’s episode, it was revealed that even a referee was working with Rollins. This match makes a lot of sense if the story continues between Owens and Rollins.

Edge vs. Randy Orton: Edge returned at the 2020 Royal Rumble and eliminated Randy Orton from the match. The former Rated RKO members appeared to be planning a return but Randy had different plans, attacking Edge with a chair. A match between the two makes a lot of sense. 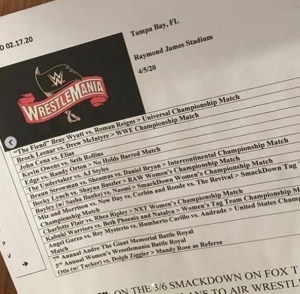 Becky Lynch vs. Shayna Baszler (WWE Raw Women’s Championship): Becky Lynch has defeated most of the Raw women’s roster so having Baszler as the next challenger makes sense. This match means that Baszler will win a title opportunity at some point, maybe the next PPV?

Bayley vs. Naomi (WWE SmackDown Women’s Championship): Naomi recently returned to the ring. There is no indication of a feud with Bayley but that could change soon.

Miz and Morrison vs. The New Day vs. Corbin and Roode vs. The Revival (WWE SmackDown Tag Team Championships): WrestleMania always has big matches when it comes to the tag titles so this wouldn’t be surprising to see.

Charlotte Flair vs. Rhea Ripley (WWE NXT Women’s Championship): Charlotte vs. Rhea is pretty much confirmed at this point, with the two attacking each other in recent episodes of NXT.

Kabuki Warriors vs. Beth Phoenix and Natalya (WWE Women’s Tag Team Championships): There is no indication of a feud between the two teams but Beth Phoenix did compete at last year’s WM.

Angel Garza vs. Rey Mysterio vs. Humberto Carrillo vs. Andrade (WWE US Championship): There is a big feud going on with several members of this match so this makes a lot of sense. We’ll see what happens.

Otis vs. Dolph Ziggler (Mandy as Referee): Ziggler has ruined Otis plans with Mandy so this match is definitely something that people want to see.

7th Annual Andre the Giant Memorial Battle Royal and 3rd Annual Women’s Wrestlemania Battle Royal: These two matches have been part of recent WMs so they are expected to be on the card.