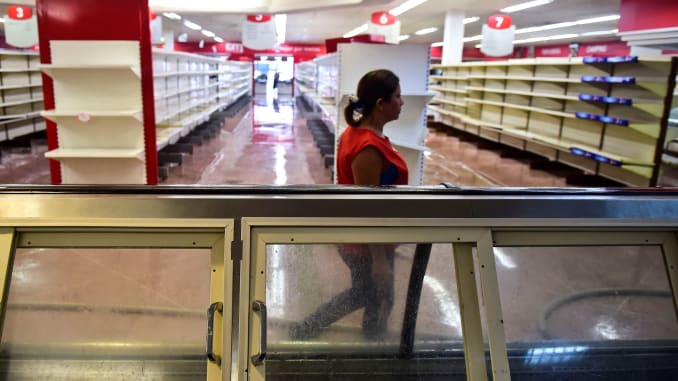 A new study by the UN World Food Program has found that a large percentage of Venezuelans are struggling to meet the minimum nutrition requirements. The new study comes as Juan Guaido and Nicolas Maduro continue to battle for power.

A survey done across the country with more than 8,000 participants reveals that the situation in the country has not improved. The struggles are largely blamed on the record levels of hyperinflation that have affected the country during the terms of Hugo Chavez and Nicolas Maduro.

The study found that 9.3 million people are moderately or severely food insecure. That is about one third of the population. The study reveals that food insecurity is a nationwide concern but also points out that the more prosperous regions are also being affected, with one of every five having that problem.

Nicolas Maduro and other officials have strongly denied that there is a humanitarian crisis in the country. In recent years, they have suggested that the crisis is being made up to spark a change in power.

Maduro and supporting officials have not commented on the study. Other studies highlighting the bad situation of the country have been put in doubt by Maduro and officials.

The survey found that 74 percent of the families have started changing their ways of eating, with some reducing the variety while others going for lower quality. 60 percent of households said they cut portion sizes in meals while a 33 percent revealed they had accepted food as payment for work. 20 percent reported selling family assets to have their basic needs.

The situation appears to be far from over as Maduro has repeatedly said he will serve as president until at least 2025. Maduro held a presidential election in 2018 but the opposition and allies labeled it a fraud since it was not only moved up but also held without many of the opposition candidates. Maduro won by a big margin, raising doubts on the results.

The high levels of hyperinflation and crime have forced millions to flee in the last five years. Colombia, Chile, Argentina, Ecuador, Peru, and the United States are some of the countries that have seen the arrival of Venezuelans over the last few years.

The food problem in Venezuela is linked to the levels of hyperinflation. According to the study, seven out of ten reported that food could always be found but that it was difficult to buy due to the high prices.

The salaries in the country only equal to a few US dollars since the country’s currency loses value almost every day. Imported food can be found in supermarkets and other businesses but they have high prices, usually in US dollars. Some of the population now makes purchases in US dollars or the equivalent to them.

Maduro blames the situation on the Trump administration, which has brought several sanctions in recent years. The majority of PSUV officials, including some in the military, have already been sanctioned by the US. Back in late 2019, the US announced more sanctions. The latest sanctions prevent US businesses from doing business with Venezuela.

The sanctions have forced several companies to step away. Some have returned after a brief suspension of operations with approval from the US government. The Trump administration has repeatedly confirmed its support for Juan Guaido, who stepped in as interim president in January 2019.

Mar 31, 2020
On Tuesday, Chile's Health Ministry announced that it would extend the quarantine in six communes of the Metropolitan Region: Las Condes, Providencia, Ñuñoa, Lo...