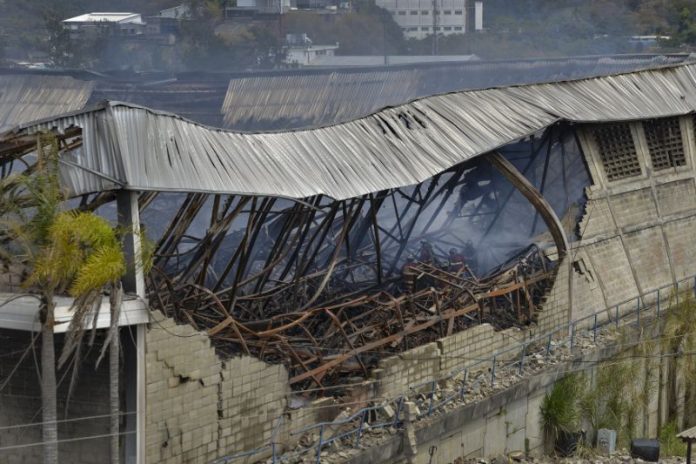 Electoral council chief Tibisay Lucena said that nearly 50,000 voting machines and 600 computers were destroyed during the fire, which broke out in the warehouse located in Mariche.

Ms. Lucena said during a news conference on Sunday that the fire destroyed 582 computers of the civil registry, 49,408 voting machines, and 400 electronic ballots. The electoral council chief said that two of the three steps in the electoral process had been affected by the fire.

The electoral council chief said that nothing is being ruled out and added that in 2017, those who did not want elections attacked operators, burned vehicles, made death threats, and burned voting machines, but the election took place.

A video of a rebel group claiming responsibility for the fire has surfaced on social media. But Lucena, Maduro, or any other officials have not confirmed if the group was behind the fire.

Elections for the National Assembly are scheduled to take place this year. The National Assembly is the only institution in Venezuela that is not controlled by Maduro. The PSUV party has instead created a separate constituent assembly made up of most of their officials and supporting parties.

The last elections for the National Assembly, held in late 2015, saw the PSUV party suffer one of its biggest defeats. The party lost most of its seats after having control for many years. The elections were surrounded by controversy as the opposition accused the government of attempting to stop them from having the majority.

The electoral council of Venezuela has been heavily criticized for its controversial elections and results. In 2018, it held a quick presidential election that saw Maduro win by a big margin, despite surveys showing low levels of popularity.

The electoral council, known as CNE, is in charge of overseeing and guaranteeing the transparency of each election in the South American nation. But its officials have been accused of being in favor of Maduro. Ms. Lucena has been one of the most controversial figures, often showing support for Maduro and the party.

In 2017, Ms. Lucena was among the 40 officials sanctioned by Canada. Months before, the US had sanctioned her and 12 other officials. The majority of the sanctions have come after questionable elections held by the government and monitored by CNE.

No date has been set for the 2020 National Assembly elections but some opposition members fear that an election without the CNE could mean another controversial election in favor of Maduro and his party.

Juan Guaido, the country’s interim president, and Nicolas Maduro have been in a battle for power since early 2019. Guaido is recognized by over 40 countries, including the US and Colombia. Maduro has repeatedly stated that he is the real president since he won the election in 2018.