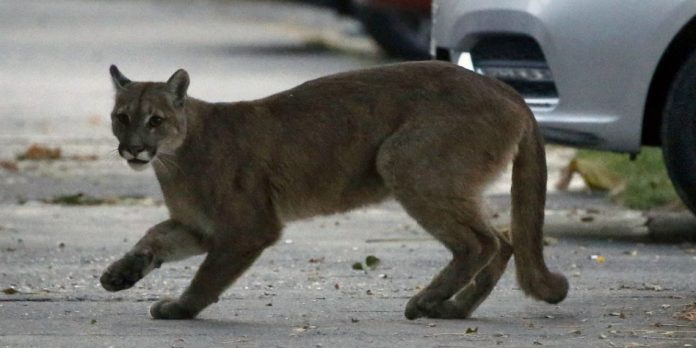 Chilean authorities have captured a second cougar walking around the city. The cougar was spotted late Wednesday and captured shortly after. The animal is the second to be spotted around the city during the quarantine and curfew.

Two weeks ago, the government announced a curfew for most areas of Santiago. Authorities later announced a quarantine for several communes. The quarantine has brought a complete lockdown to those areas but not for the cougars who have been spotted walking around empty areas of the city.

Cougar Is Seen Walking Around

A video taken by a resident shows the nearly 50 pound animal walking around the city north of the capital. The cougar is the second to make the news over the last two weeks since it is rare to see them enter the city.

The lockdown and curfew may have something to do with that, according to experts. Marcelo Giagnoni, regional director of the country’s Agriculture and Livestock Service, explained that the quiet and empty areas may be attracting the animals.

Santiago is a city with close to seven million people and it is usually busy with cars and public transportation going around. But the lockdown has forced people to stay inside until the situation improves.

No Noise and Empty Areas May Be Attracting the Cougars

Santiago is surrounded by mountains and the wild but it is rare to see animals such as cougars explore the city. Giagnoni says that at least in Chile, this is a phenomena unique in their history, adding that there is no people, no noise, so the animals explore a little more.

The regional director also said that the severe drought, which has heavily affected many areas of Chile in recent years, had likely brought the cats since they are desperate for food. Busy areas of Santiago are now empty or see little activity during day and night, so this likely convinced the cats to explore.

First Cougar Captured In the Capital

The first cougar was captured less than two weeks ago. The animal quickly made the news since it was spotted walking around apartment blocks near a busy area of the city. The cat was spotted exploring the city during daytime and authorities later captured it. The animal was released outside of Santiago shortly after.

Wildlife officials said the cougar captured on Wednesday has been taken to a city zoo, where it is being examined before its release.

Animals Are Exploring a Lot More

The situation with the coronavirus has brought more animals to areas that are often busy with tourists and residents. Just a few days ago, Peruvian media reported that a beach had been taken over by seagulls and pelicans. The animals often stayed away from the shore since the beach is usually filled with visitors. But the recent lockdowns and measures to get people to stay inside have left tourist attractions completely empty. Hundreds of seagulls were seen sitting on the shore while a large group of pelicans were spotted on fishing boats.