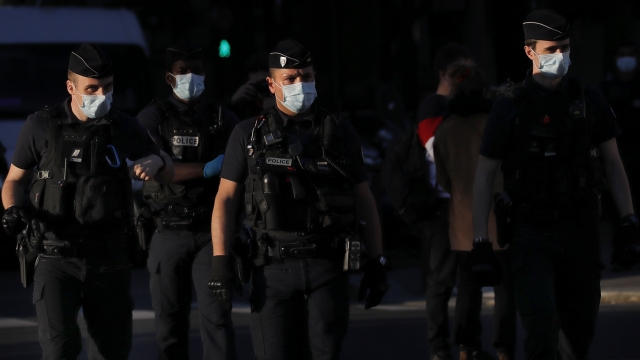 Authorities in France seized close to 140,000 ”illegal” masks during a police operation on Saturday. The operation, which took place near Paris, brought several officers to the area. Two men were arrested during the operation, with Euronews reporting that the suspects were caught unloading several boxes from a shipment that came over from the Netherlands.

The arrests happened in the area of Saint-Denis, which is near Paris. Euronews also reports that a prosecutor said that authorities had opened an investigation on possession of counterfeit goods and deceptive marketing practices.

The masks were being stored in a building in the area. Local media reports that the men caught by authorities are aged 46 and 60. One of them told authorities he was a business owner and said he had bought the masks in the Netherlands. Authorities say the shipment of masks has a value of 80,000 euros.

French authorities said the plan was to resell them to acquaintainces and make big profits. The masks were seized and the two men are now under arrest. Euronews says this is the largest seizure of protective masks since the government announced a ban on their resale.

The news site reports that last month, 32,500 masks were seized from a warehouse located in Saint-Ouen. The masks seized during the operation came from China. That same month, 28,800 masks were found in a shop located in the commune of Aubervilliers.

Protective masks have become a must have item during the coronavirus pandemic. One of the recommendations by experts is to wear a protective mask at all times and avoid contact.

Some countries immediately saw a shortage of masks since people rushed pharmacies and other stores to have one before the situation got worse. In some places, wearing a mask is now required to go outside.

Chile and Germany are among the many countries that require masks. In Chile, the masks are mandatory for those who use private or public transportation. Authorities in the South American nation can stop and fine people who are caught without a mask.

In Germany, residents have started wearing protective masks outside as part of new rules to stop the spread of the virus, which has left thousands of people dead in Europe and other parts of the world.

The use of cloth masks is now mandatory for shops and public transportation. The rule does change from state to state. In some areas, the rules are more strict while in others, residents are not required to wear a mask.

Face-masks continue to be in shortage in some countries and residents have started to create their own. Some shops have also started selling self-made cloth masks in different types of colors and designs.

Google statistics have the number of coronavirus cases at 2.9 million. Over 800,000 people have recovered but 207,270 deaths have been reported. The United States, Spain, Italy, and Germany are among some of the most affected by the virus. China, where the virus first surfaced, is now 10th on the list of most cases. The country was number one when the virus first surfaced but the situation has changed with the quick spread, which has led to more than 980,000 confirmed cases in the US alone. Spain is currently second with 219,764 while Italy is third with 197,675 confirmed cases.