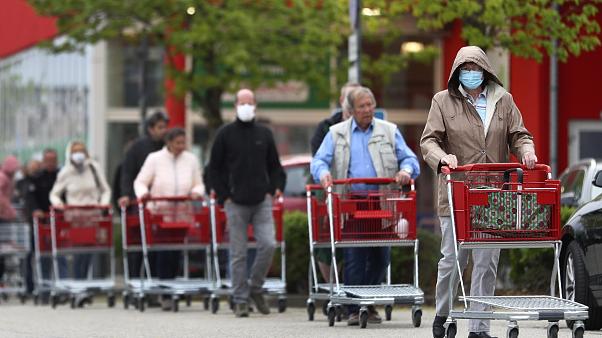 Germany has eased some of the restrictions that were introduced when cases of the deadly virus were first reported in the country. Small shops such as bicycle stores have been reopened but the country still has many measures and restrictions in place.

In several areas, residents are required to wear face masks in public. Germany’s situation isn’t as concerning as some of its neighbors but the country continues to take the spread very serious since more than 4,000 deaths have been confirmed. On Monday, more than 1,700 new cases were reported.

Parts of Europe have been heavily affected by the deadly virus, which began spreading to other parts of the world earlier this year. The virus is said to have surfaced in China in late 2019. But the rest of the world began seeing cases in the first three months of 2020.

Italy and Spain have been some of the most affected in Europe. Spain has seen thousands of cases and deaths since early 2020. In the last 24 hours, the country reported 399 deaths linked to the virus. The number of deaths is second behind Italy, which has also reported a high number of cases over the last few weeks.

The daily death toll has decreased in the two countries in recent days. But the two are still seeing a high number of cases compared to other parts of the world. The BBC reports that more than 200,000 are infected with the virus. More than 80,000 people have recovered so far.

The situation in Europe has brought a stop to the region, just like in many places around the world. Schools, stores, and other areas where large crowds gather have been closed.

Germany continues to see cases but the numbers have convinced authorities to slowly ease the lockdown. The relaxation of the restrictions has been different in each state. In some areas, authorities have decided to allow small and large shops to open.

Germany has been on lockdown since late last month and many of the restrictions and measures will likely continue for the next few weeks. Hotels, restaurants, and the majority of schools are currently closed.

The government has said that the lockdown for businesses will remain in place until at least May 3. Some parts of Europe have decided to open small shops and businesses. But some areas continue to have the same restrictions and plan to keep things unchanged for the near future.

Austria made a similar decision to Germany last week, allowing some stores and small shops to reopen. The social distancing rules remain for the shops and areas currently open. Denmark is one of the first to reopen primary schools and kindergartens. It was announced that on Monday, some businesses would also be allowed to open.

The BBC reports that Poland is reopening forests and parks. On Sunday, the country reported over 500 new cases. The Czech Republic has confirmed that open markets are allowed but its president has said that borders should remain shut for the rest of the year.

More than 2.4 million cases have been reported around the world, according to Google statistics. 651,736 people have recovered from the virus. 170,389 deaths have been confirmed.