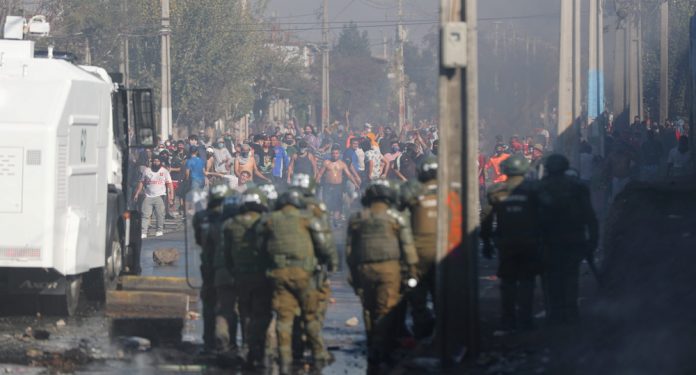 Authorities and protesters have clashed in a commune of the Chilean capital Santiago over the lockdown and food shortages.

The clashes come months after the government introduced a lockdown and curfew that only allows residents in most parts of Santiago to go outside two or three times a week. Local media showed police using tear gas and water cannon to respond to the protesters who took the streets to show their disapproval for the measures and the situation with the food.

The South American nation now has over 46,000 cases of coronavirus. Over the last few days, there has been a surge in cases, forcing the government to announce more measures, including a total lockdown.

The protests on Monday took place in the commune of El Bosque. A statement released by local officials said they had provided close to 2,000 aid packages but added they could not meet demand. The government later promised to provide food and other essentials for residents who have been severely affected by the situation.

The number of coronavirus cases in Chile have rapidly increased, despite the many measures that have been announced since they began rising. Early on, the government announced a curfew that still remains.

A lockdown was later announced for many communes of Santiago. The communes were said to have the highest number of cases. A week later, authorities removed a commune from the list but it was later placed in quarantine.

A total lockdown has now been announced since the cases and deaths continue to go up. Residents of Santiago are currently allowed to go out twice per week by entering the police’s official website to fill out a form. The form provides different types of permissions to go outside, including one to buy basic goods and another to visit banks. The permission only lasts a few hours and can be requested through the site two times per week.

Supermarkets and other businesses in the country have introduced several measures to keep things as safe as possible. Some have marked floors so that customers can keep distance from each other while others have employees taking temperature checks at the entrance.

Chile has seen a number of clashes over the last year. Back in October, the country saw many residents take the streets to protest a price hike on public transport. The price hike protest began with hundreds of students entering metro Santiago without paying.

The protests later turned violent as many residents took the streets to show their disapproval for the hike and other problems in the country. The situation led to looting and many arrests. Several metro stations were completely destroyed or suffered heavy damage during the protests. The government later announced changes but many of the protests continued in the capital.