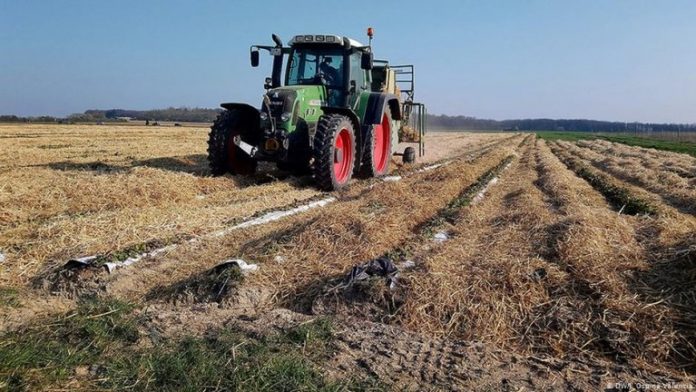 A number of Romanian farmworkers could be stranded in Germany after the company they were working for went bankrupt. The group of workers is now waiting for more help as they don’t know much German and don’t know what to do to return home.

DW reported on the story of Anca, a person who did not want to be photographed or have her real name used for the publication. She told the news site that she has been waiting for the pay that the company owes her and other employees from Romania. The workers were picking up fruits and vegetables at a farm in the town of Bornheim.

DW reports that there seems to be a solution in sight since the Romanian consul has spoken with them and given them a meal and some money. He also promised to help the group, according to Anca.

Anca and others had been waiting to hear good news for some time. She found out about the consul’s support on Tuesday. Anca and the group had worked with the farm before and she said the owner had always looked after them. Things didn’t go so well during this season, with employees revealing that the farm is now under the supervision of a trustee.

Anca said they didn’t know that the company was bankrupt when they came to work. The situation came during difficult times for many companies around the world. The coronavirus pandemic has forced many businesses to suspend operations or shut down completely. Demand for the fruits and vegetables has dropped over the last few months since restaurants and other places where they are needed are currently closed. Germany and many European countries have started to ease the restrictions but the industry is still suffering since things are far from being back to 100 percent.

The farm’s creditors decided to stop the asparagus harvest and reduce the picking of strawberries. This led to a reduction in staff and Anca was one of the people cut. The workers complain that the employers have deducted more money for food and accomodation. Anca and other workers say they have not received full pay for their labor.

The majority of the workers don’t have enough money to return home. Officials have promised to help but the group’s situation is still surrounded by many questions. They are currently staying in a place provided by the farm. But the company has gone bankrupt and they fear that electricity and water will be cut off.

Anca said she came to Germany on a three-month contract that started in early March. The situation has caught the attention of unions and DW reports that media have repeatedly reported on what’s going on in the industry and foreign workers.

Anca does not know if she will receive the money that is owed to her. But she has already confirmed that she plans to return for more work next year but with a different farm.

The group was initially told it would be flying to Lima, Peru. But then they were informed that the flight had been cancelled since the plane was not allowed to land in Peru. The BBC reported earlier today that the group has stayed in a German castle for the last 73 days.