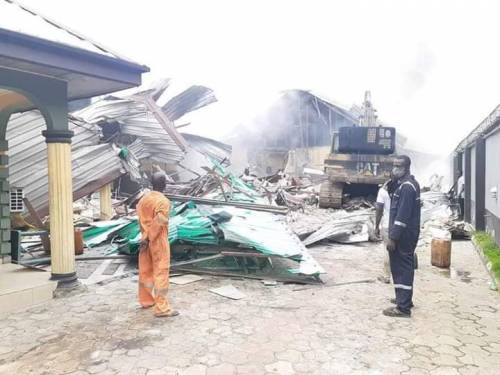 Authorities in the Rivers state have taken down two hotels that were accused of breaking lockdown rules introduced to contain the spread of the deadly coronavirus. State Governor Nyesom Wike said the operators had gone against the orders asking hotels to be closed. Reports say he was there on Sunday to supervise the demolitions of the two hotels.

One of the owners of the hotels that were demolished gave a different story on the situation. Gogorobari Promise Needam told the BBC that the hotel was not operating and 70 percent of the employees had been sent away, adding that only three people were on ground.

The owner also gave his version of what happened when officials showed up to the hotel. He said that they came in asking for a bribe and that they would be allowed to operate if they gave them money. He responded by saying that they were not operating so they had no money to give.

Like many countries around the world, Nigeria has taken measures to prevent the spread of the virus, which has more than three million confirmed cases around the world. A lockdown was announced for some areas last week. But a few others have already had a lockdown for weeks. In some places, authorities have started to ease the lockdown.

The BBC reports that officials are planning to do a few other things with the properties of people that have been caught breaking the rules during the lockdown. The news site reports that officials are planning to auction vehicles seized from those caught outside during the lockdown. Some areas require a special pass, which is personally issued by the governor. The pass allows residents to move around and not face fines when stopped by authorities.

The state government says the governor signed an executive order granting him power to enforce the rules. The demolitions and the measures from officials have caught the attention of lawyers. Ahmed Abass told the BBC that an order does not give the governor power to take down a building.

The managers of both hotels have been arrested. The lawyer said that what the governor should have done was to arrest the owners and take them to court.

Nigeria has 4,641 confirmed cases and 151 deaths. The numbers are low when compared to parts of Europe and the US, where the majority of cases have been reported. But authorities have announced strict measures. Other countries have introduced big fines for those caught breaking the lockdown rules or going around without a face mask. In some places, businesses are allowed to ask visitors for a face mask.

Coronavirus began seeing cases back in late 2019. There are now over 4 million cases confirmed and 286,353 deaths. Nearly 1.5 million have recovered from the virus, according to Google statistics.