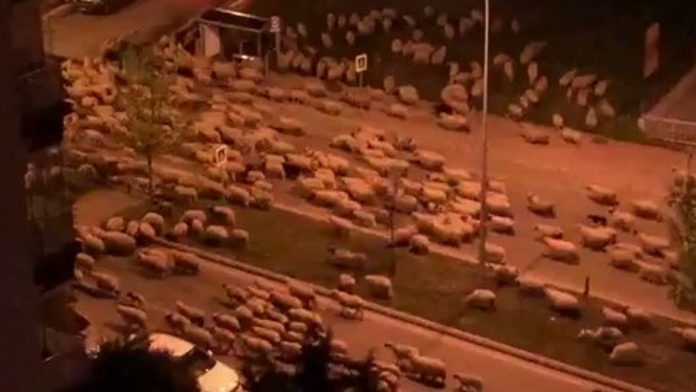 Samsun is on lockdown, just like many other cities around the world. Residents are staying at home to follow the rules but animals have taken over in many parts of the world.

In Wales, mountain goats have been spotted wandering the empty streets. A video from the BBC shows a large group of mountain goats walking on sidewalks and running across roads.

The goats often walk to the area when there is bad weather, but officials believe the lack of people have caught the curiousity of the animals.

The goats and sheep are not a big problem for the cities. But in some parts of the world, authorities have been forced to take action to keep animals out of cities. Last month, Chilean authorities captured a cougar walking around in a city. The capture was the second since the lockdown started a few weeks before.

In Santiago and other parts of the South American country, the government has introduced a curfew and quarantine. The measures have left entire cities completely empty at night and early in the morning.

Experts said at the time that the animals coming into the city was likely due to the quiet and empty areas. Santiago has a population of almost seven million people but the lockdown has left busy areas completely empty, catching the curiousity of the animals.

Local media has reported the capture of at least another cougar since. The animals are captured, examined, and then released out of the city. The visits by the animals are rare since experts say that cats often stay away from these areas due to the noise and little activity.

One of the experts who talked about the cougars coming into the city said that something else was also convincing the animals to explore. Chile has seen severe drought in some areas and the expert believes the cats are desperate for food, attracting them to the quiet cities.

The first cougar spotted after the lockdown went viral since several residents took pictures of the animal walking around the city. The animal was captured and released out of the city some time later.

In Peru, residents were surprised by the amount of seagulls and pelicans that took over a touristic area. The beach, which is a popular spot among residents and tourists, was closed when the country began seeing coronavirus cases. But the pelicans and seagulls have taken oven the shore and the fishing boats that sit nearby.

In South Africa, the lions at Kruger National Park recently went viral after they were spotted taking a nap on a road that is usually busy. The park, which has been closed since the lockdown began, only sees park rangers, who are in charge of guarding the animals.

With the little activity there, the lions have decided to get comfortable on roads and other places that are often visited by large groups of people. One of the park rangers spotted the lions and decided to take a picture. The ranger explained that the lions only sleep on the roads when it is cold at night. He said they do this because the roads retain some of the heat from the day.