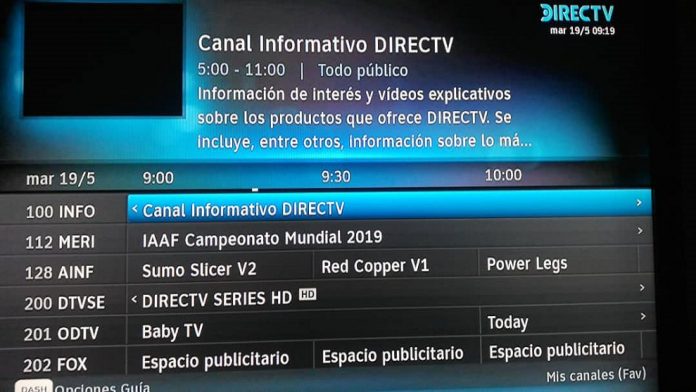 AT&T announced on Tuesday it was shutting its DirecTV subscription service in Venezuela over US sanctions. The announcement comes as part of the population is at home due to the situation with the coronavirus.

DirecTV, a service that’s been available in the country for many years, provides a source of entertainment for many Venezuelan families. The television service offers a number of local and foreign channels. The service is currently one of the most popular in the country since it offers much more options and a bigger variety of channels over local television companies.

The company released a statement saying that because it is impossible for the DirecTV unit to comply with the legal requirements of both countries, AT&T was forced to close its operations in the country.

Users reported having just local channels on the service while others said the channels had gone completely blank. The company later released the statement confirming what happened and why the decision to shut down the service was made.

The shut down now leaves the country with less options when it comes to television services. Venezuela has several local channels but they have been accused of showing content in favor of the government.

The announcement by the company comes months after the US announced more sanctions against Maduro and supporting officials. Last year, the US government announced sanctions that prevent US companies from doing business with the country.

The sanctions forced several companies to suspend operations right away. Adobe was one of the several that decided to leave the country, ending its subscription for the service in a short period of time.

The sanctions against Venezuela are said to be a move to put pressure on Maduro, who continues to be in power despite an economic and political crisis that has turned Venezuela into one of the poorest countries in Latin America.

There have been many sanctions in the past but the one preventing US companies from working with the country is one of the toughest. Maduro and supporting officials blame the country’s problems on the sanctions.

Millions of Venezuelans have fled the country over the economic and political crisis. Estimates by organizations say the numbers will likely continue increasing since the situation is not getting any better. Millions are currently staying at home due to the situation with the coronavirus but reports say the country is already facing a big problem with fuel shortages in most cities.