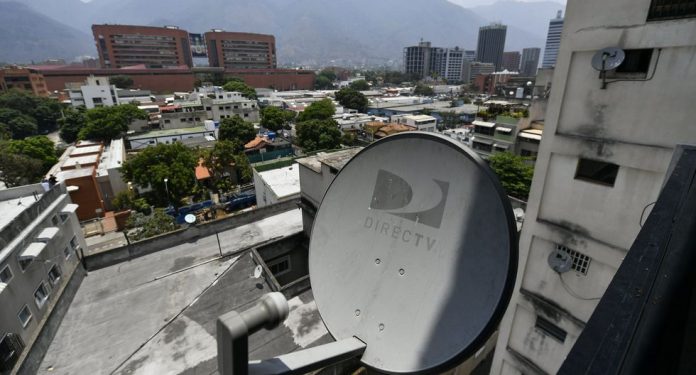 Nicolas Maduro talked about the sudden exit announced by the DirecTV service earlier this week. But his comments were all jokes and smiles as he did not give a detailed explanation on the situation that led to the company’s quick exit.

Nicolas Maduro said during a televised speech on Thursday that the exit announced by AT&T’s DirecTV had put things in style, adding that coat hangers, antennas, wires and the world were now in open signal.

On Tuesday, AT&T shocked users in Venezuela when it announced that it was shutting down its service due to the sanctions that the US government has against the country. The company explained that the sanctions prevent them from showing anything by Globovision and state channel PDVSA TV.

The company was required to have both channels for the license provided by the regulator in Venezuela. Infobae reports that the service made up 45,32 percent of the subscription service market in the country. The service had close to two million users when the decision was announced on Tuesday.

Infobae reports that the shut down affects around 6.5 million people. DirecTV’s decision shocked users since it came out of nowhere. Many users were confused about all channels going blank while others did not understand why only local channels were available. They later found out the service had completely shut down in the country.

AT&T explained that the decision was made by the team in the US and that its team in the South American nation had no participation or was told about it. The two channels that led to the decision are linked to the Venezuelan government, which has been sanctioned in many ocassions in recent years.

Globovision has been accused by the opposition of serving as a tool for the government while PDVSA TV is linked to oil company PDVSA, which is in control of the government. The channels were required for DirecTV to have the license there, which meant that the company had no other option but to shut down there.

AT&T is not the first to leave the country over the US sanctions. Over the last year, several US companies have left Venezuela to avoid any fines or legal action against them. Back in late 2019, the US government announced some of the toughest sanctions against the South American country.

The sanctions prevent US companies from working with Venezuela. The announcement of the sanctions quickly led to the sudden shut down of many services and businesses. One of them was Adobe, which later returned after receiving permission from the US government.

The sanctions from the US government have put pressure on Maduro but he continues to be in power. The US and allies instead support Juan Guaido, who stepped in as interim president over a year ago. Juan Guaido and the opposition are looking to have fresh elections with the support of the international community. Maduro has repeatedly said he is the real president of Venezuela after winning an election in 2018. The opposition and part of the international community see the 2018 election as a fraud since it was not only moved up but also held without the participation of many candidates.