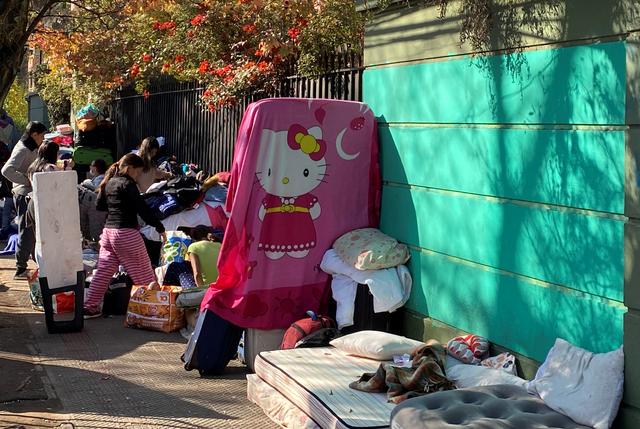 Hundreds of migrants that once entered Chile in hopes of getting a better life are now asking to be returned home. Hundreds of Venezuelans, Colombians, Bolivians, and Peruvians are asking their countries for help.

Large groups of people have gathered outside consulates to ask their country for a flight back home. The situation comes as many have lost their jobs or homes due to the coronavirus situation.

Over the last few months, the coronavirus pandemic has forced many companies to cut personnel or suspend operations. Many of the migrants have lost their jobs and have had no option but to live in the streets after falling behind on their rents and payments.

At the Venezuelan Embassy in Chile, hundreds started gathering in late May to ask the government for help. The large group of people set up tents along the sidewalk as they waited for the government of Venezuela and Chile to come up with a way for them to go back home.

Local media interviewed several Venezuelans there, including some who said that they had received help from the people who live near the consulate. Most of the group camped outside the embassy for updates.

Over the last two days, hundreds of Bolivians have also gathered near the consulate to ask for help. The group has set up tents close to the consulate and has asked for the governments to return them home.

Chile has been affected by the coronavirus, with thousands of cases and a number of deaths being reported over the last few days. The South American nation has introduced measures such as lockdowns and requirements for people to be able to go outside. Local media has shown authorities monitoring the situation at the camps.

Several Peruvians have also requested to be returned home. Peru is nearby but the situation isn’t any easier since both countries are currently trying to deal with the coronavirus and the recent increase in cases.

Some of the members representing the Bolivian camp have requested for the government to at least take the children and those sick to a shelter. The group is currently living in tents but local media has reported that they have no bathrooms and areas where they can sit down and eat.

Local media also reported on the situation back at the Colombian camp, where many are desperately asking for the government to help. One channel reported on a woman who has breast cancer. The woman said that the cold weather is putting her at an even bigger risk. The group has also set up tents as they wait for a response from the Colombian government.

Colombians, Venezuelans, Peruvians, and Bolivians make up a high percentage of the migrants who have entered Chile over the last ten years. The majority have entered the country to have a better life. But the coronavirus situation has led to a loss of jobs and homes.

Chile is one of many countries that are currently dealing with migrants and tourists stranded. Other parts of the world have seen large groups gather outside embassies and consulates. In Germany, several Romanian farmworkers are looking for a way back home since their company filed for bankruptcy and has not paid some of them. Romanians often come to the country for work but this group was surprised after they found out that the company had filed for bankruptcy. Most of the workers were cut from their jobs but the group was left stranded since they didn’t get paid or don’t have enough to return.