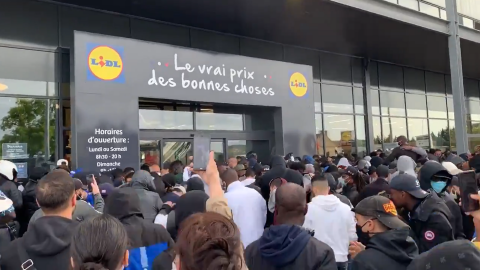 German supermarket chain Lidl had a PS4 firesale that went wrong after crowds showed up to have the chance to purchase the Sony console. People learned that the chain would be selling the console for just 95 euros. The PS4 is usually sold for 300 euros so the firesale brought hundreds of people to the store.

Euronews reports that a crowd of 500 people gathered in front of the store on Wednesday morning. The crowd was looking to purchase the console at the low price. But authorities had to step in after the situation started getting out of control. Police had to disperse the crowd shortly before the store opened.

The firesale was cancelled due to the situation that took place outside. Authorities said some of the people waiting had showed up and camped nearby since Tuesday night. Gendarmerie said that it was tense at the opening and that they hired 70 people to restore order and they had to push back the crowd.

They also told the AFP that a bottle was thrown at a policeman. One person collapsed during the incident. The situation was under control a few hours later but authorities said around 150 people remained outside.

The supermarket chain later confirmed that the firesale had been cancelled and that the location was closed. The chain explained that the sale came from a similar sale of the consoles back in April 2018.

The chain reportedly kept things quiet about the sale but a private photo of it caused the news to go viral. The news brought a large crowd looking to purchase the console at a very low price. Earlier this year, the supermarket chain sold PS4s for 80 euros. The sale took place during the opening of a store.

The firesale is not the first to go wrong in the country. Back in early 2018, a different supermarket chain was in the news after a sale of Nutella sparked chaos in some locations. Supermarket company Intermarche offered a 70 percent discount on Nutella, drawing large crowds to some of the locations where the sale was taking place.

The discount took the popular sweet spread from 4.50 euros to 1.40 euros. Reports said some customers fought and pushed each other as they attempted to get their hands on the product. Several locations were forced to call authorities so they could put the situation under control. A fight was reported in at least one supermarket offering Nutella at the low price.

Earlier this year, authorities had to show up to a supermarket after a dispute between customers and a Geant Casino location. The store accidentally priced TVs at 30.99 euros but customers were not allowed to purchase them when they showed up to the cashier. Some of the customers decided to remain in the checkout area to demand the company to honor the price.

The store was cleared an hour before closing time. Videos and images on social media showed large groups of people waiting with TVs in their shopping carts.

The sale comes as Sony is getting ready to release the PlayStation 5 at the end of the year. The upcoming console was unveiled during a livestream last week but the company did not reveal its price. The only major detail revealed for the console is that the company will be offering two variants, one with a disc drive and another totally digital.