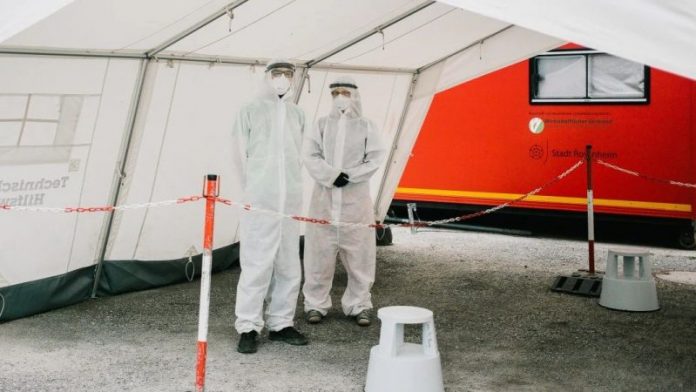 German authorities have sent in reinforcements to a tower block after a quarantine introduced to that area led to an incident. The tower block in the city of Goettingen was under quarantine and residents knew about the measure. But there was violence on Saturday since some did not want to remain there.

The BBC reports that 700 people were placed in quarantine but a few hundred that were trying to get out clashed with authorities. Officials said that residents went after police with metal bars, fireworks, and other objects.

The measure on the tower block was introduced after two residents tested positive for coronavirus. Authorities decided to introduce the quarantine on Thursday but it didn’t take long for some residents to be in disapproval with the rule since some were confused and others were asking why they needed a second test.

A day after the measure was announced, 120 people were found to be infected. The BBC reports that anyone testing negative is being required to have more tests. If those tests are negative, they will be allowed to leave but with some restrictions, including wearing a face mask when outside.

At one point, the situation got out of control and some residents clashed with authorities. Several police officers suffered injuries when a group of people broke through a security cordon.

Local officials brought up communication problems as one of the reasons as to why everything happened. The measure had several people confused as some didn’t understand why health officials were requiring to have more tests. Local media reports that they are trying to work on communication with residents. Translators have worked on having the information in other languages and that information is said to have been sent to the people.

Germany has more than 192,000 confirmed cases so far. Over 175,000 of those cases have recovered. The country has reported 8,961 deaths, according to Google statistics. Germany has over 190,000 cases but experts have pointed out that the country has been one of the most effective when it comes to testing. Other parts of Europe have reported many more cases and deaths.

The tower block is not the only area under the watch of authorities and health experts. Authorities in the Gutersloh area told 6,500 employees and their families to go into quarantine after cases were discovered in a meat plant.

The latest reports say the number of cases linked to the plant is currently at 1,331. The cases have increased over the last few days, convincing authorities to introduce the quarantine.

Coronavirus cases have continued increasing over the last few weeks. Millions of cases have been confirmed so far but the situation has taken a different route over the last month. Parts of Latin America are now seeing numbers go up by thousands. One of the most affected is Brazil. Neighbors and other parts of the region such as Ecuador, Peru, and Chile have also had a difficult time containing the virus. Two days ago, Brazil became the second country to have more than a million confirmed cases.