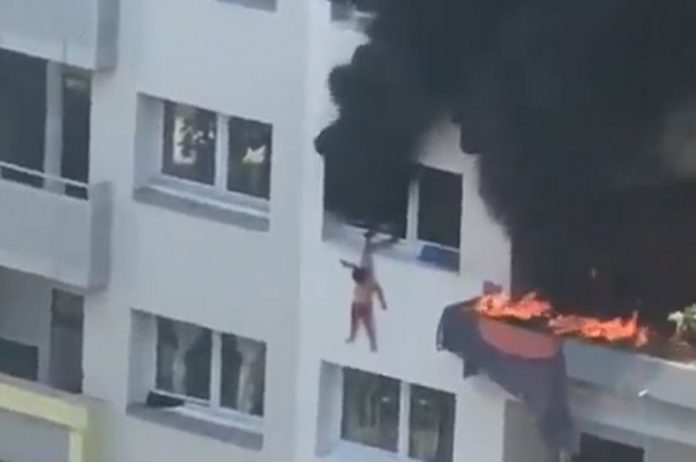 A group of people watching an apartment building on fire was able to save two young brothers who had no choice but to try to climb out the windows. The brothers dropped about 33 feet from a window before being caught by people who were watching in the street.

Local media reported that the young brothers did not suffer any injuries during the fall but might have suffered from smoke inhalation. A short video taken by people watching from other buildings shows one of the brothers hanging on the window before he falls. The crowd watching catches him. A few seconds later, the crowd gets ready for the other brother who falls right into them.

The two appeared to have no other choice since heavy smoke was coming out of the windows and the balcony next to them was on fire. They were hospitalized along with 17 other residents, according to local media.

The student said he heard the screams and went outside to see what was going on. He rushed to help with a group of people. Walid told the Associated Press that they didn’t know what to do. Their first idea was to break the door but he said it wasn’t possible.

They decided that the only chance they had to save the boys was to get their attention and get them to jump into their arms. The group was able to save the brothers in just a matter of seconds.

The heroic efforts by the crowd have already led to a response from Mayor Eric Piolle, who congratulated the residents. This is not the first time that a heroic effort makes the news. Back in May 2018, a man from Mali rescued a child that was dangling from a balcony in an apartment building located in another part of France.

The man went viral since his rescue effort was totally different and fast. Videos of the incident showed the man climbing from balcony to balcony until he reached the child and helped him get to safety. The child was reportedly left unattended after the father went shopping. Other reports later revealed that the father had taken longer to return since he had decided to play the mobile game Pokemon Go.

People started calling him Spider-Man since he climbed all the way up as many watched from the street. Local media later revealed more about the man and his journey to Europe. The man also met with government officials, including the president. The heroic gesture earned him the French citizenship. He was also offered a role in the fire service which he accepted. It was later reported that he was still working there with a ten month contract as an intern.