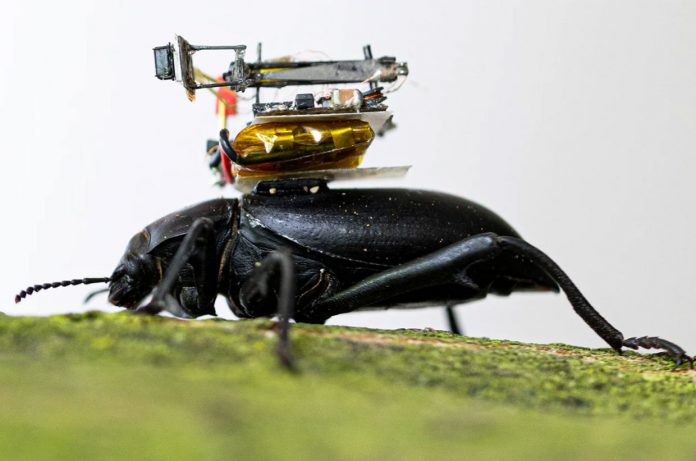 Cameras are only getting better, we have them on phones, tablets, and many other devices. They are used by millions every day but this type of technology doesn’t usually get small to the point in which beetles can start streaming their adventures.

Things appear to be changing now as researchers have developed a small wireless camera that is light and small enough to be placed on the back of a beetle. The creation comes from a team at the University of Washington in the United States.

The team looked at beetles and decided to create a camera just for them. The system isn’t as good as the one found on a new smartphone or other devices. But the camera system can stream up to five frames per second. The low resolution footage is only captured in black and white. The system can stream to a nearby smartphone, according to the BBC.

The camera system is so small that it only weighs 250 milligrams. This makes it light enough for a beetle to carry it on its back. The creation also has another impressive feature to provide a better view. The sensor is mounted on a mechanical arm that can move from side to side.

The whole system allows the beetle to walk around and give humans a closer look at their adventures. The BBC posted a picture that was taken and revealed by the University of Washington. The picture shows the view that the beetle had while standing near a picture with several numbers and other objects.

Other Features of the Camera System

The researchers added a few other features to the camera so it would save as much battery as possible. The system has an accelerometer, which only takes pictures when the beetle is moving. This allows the camera to operate up to six hours on a full charge.

Cameras taking pictures or livestreaming with animals is nothing new. In the past, several livestreams have become quite popular for showing animals in the wild. In 2017, thousands of people tuned in to catch the live birth of a baby giraffe. The livestream went viral, going for over a million views on YouTube, and the giraffe became pretty famous. In 2018, Animal Adventure Park said in an announcement that the giraffe was pregnant again.

The team at the university has created something different though. The livestreams and pictures taken by animals are usually not from beetles. The insects are so small that they are not able to carry a camera like the ones we see on a smartphone or other devices. This means the university is probably one of the first, if not the first, to create a camera so small that it can be carried by a beetle.

Humans are used to carrying GoPro cameras to show amazing views and extreme sports. But the latest creation from the team at the university has created its own edition for the insects.