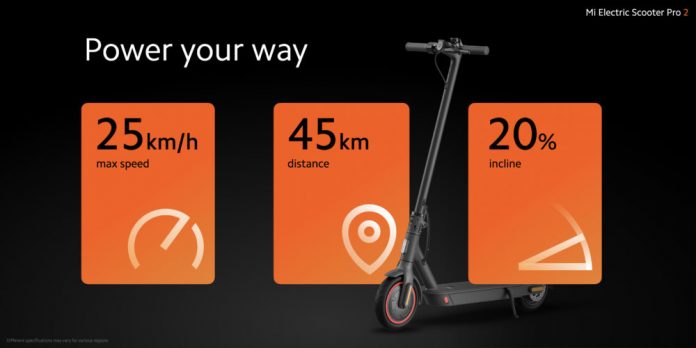 Xiaomi has announced an upgraded version of its popular scooter. The Xiaomi Mi Electric Scooter Pro 2 is a version that keeps a lot of things from previous releases but makes a couple of additions to make the experience much better.

Xataka reports that the scooter has a maximum speed of 25 km (15 miles). On top of that, the new scooter allows the user to easily fold and carry it around. This is a good thing since there are places in which you can’t travel with the scooter or the terrain is not good enough.

The majority of the improvements for this version have to do with making things safer. Xataka reports that there is a renovated braking system. The new scooter features double brakes while the first release only featured one.

Lights and Things That Return

The LED lights are now said to be two times brighter. This is a nice little improvement for the scooter since good lights are a must have for those who plan to use the scooter later in the day.

Xiaomi tweeted a picture of the scooter and how easy it is to fold and carry it everywhere with you. One of the three pictures shows the improvements that the company has made to it.

The company has kept a few things from the previous release. Two of them are the suspension system and the resistance, which continues to be an IP54 certification.

The Xiaomi Mi Electric Scooter Pro 2 will be available in Europe, according to Xataka. The official price in that region will start at 499 euros but the tech site reports that the price will remain at 549.99 euros in Spain. The scooter will be available through the company’s official website, Mi Stores, and a few other retailers. The tech site also reports that there will be another version called Mi Electric Scooter 1S, which will arrive with a price of 449.99 euros.

The Xiaomi Mi Electric Scooter Pro 2 will also be available in a different version after a partnership with the Formula 1 team Mercedes AMG Petronas. The team has won multiple championships since 2013 and continues to be one of the biggest candidates to win it all next season.

Other Products Announced By Xiaomi

The electric scooter is one of many products that the company has announced in recent days. Not too long ago, the company also announced a smart coffee machine. The coffee machine is not the first from the company but it is the first of a series. The most impressive part of the machine is that it features wireless connectivity, which means the owner can connect to it and program it to make coffee at a certain time of the day.

Yesterday, the company announced the 8H Smart Mattress, which the company has said will retail for CNY 6,799 ($972) after the crowdfunding campaign. The smart mattress can do a number of things, including an adjustment of the softness. The mattress also has a number of features that the owner can try out.