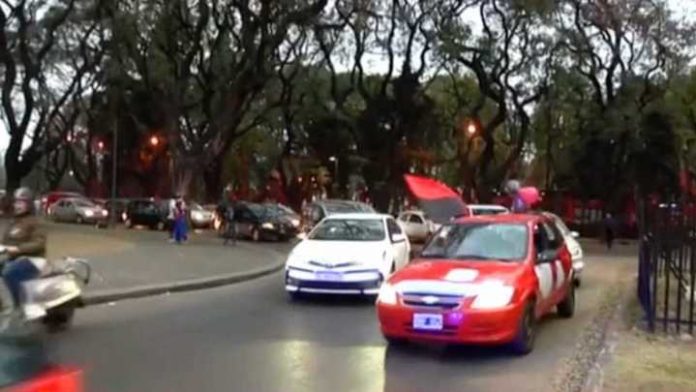 The city of Rosario saw a large group of people take the streets to ask Messi to come play for Newell’s. Lionel Messi, who was born in Rosario, was actually part of the team before he made his move to Barcelona.

The group had a parade and held flags of the team and messages to Messi. The Barcelona player suffered a huge defeat in the Champions League just a few days ago. The club lost 2 – 8 to Bayern Munich. It was one of the worst losses in the history of the club.

The shocking defeat immediately brought reports that it was the end of the team’s current roster. The situation did not get any better for Barcelona since reports a couple of days ago revealed that Messi had submitted a transfer request.

The dream of Newell’s fans to bring Messi to his first club seems unlikely at the moment. Messi, who is 33 years old, is coming off a solid season and many have him going to a club where he can immediately compete for the Champions League, the league, and other competitions.

On Thursday, reports said that one of the teams interested, Manchester City, is willing to make a three player plus cash deal for the Argentina international. One of the players mentioned in that transfer rumor was Bernardo Silva, one of the players that Barcelona have been rumored to be interested in. Manchester City are rumored to be one of the big candidates to sign Messi since Pep Guardiola is the current manager. Guardiola was part of the historic 2008-09 Barcelona team that won numerous titles, including the Champions League and La Liga.

Messi’s transfer request could also spark a battle between the two sides. The Barcelona forward has one year left in his contract but he also has a clause that allows him to leave the club for free. The clause is said to have expired in June but his team believes it should be valid still since the season was extended due to the coronavirus pandemic.

Messi has won several Champions League, La Liga, and Copa del Rey titles with Barcelona. But the team struggled to hold the lead it had on Real Madrid for the league. Barcelona lost the league and was then beaten by Bayern Munich.

Barcelona has already hired a new manager and big changes are expected for the roster. Suarez, Pique, and Umtiti are some of the names that could leave the club before the start of the new season. Pique offered to leave Barcelona after the loss against Bayern Munich.

The transfer request by Messi has sparked some protests in the city, mostly in front of Camp Nou. Hours after the reports of his transfer request, several people were seen standing outside of the stadium to show support. Yesterday, local media showed a group of people breaking in and running in the areas out of the stadium.

Argentina has seen the return of some of its biggest stars over the years. Tevez returned to Argentina after his run with Manchester City and Juventus. Riquelme also returned after playing in Europe.