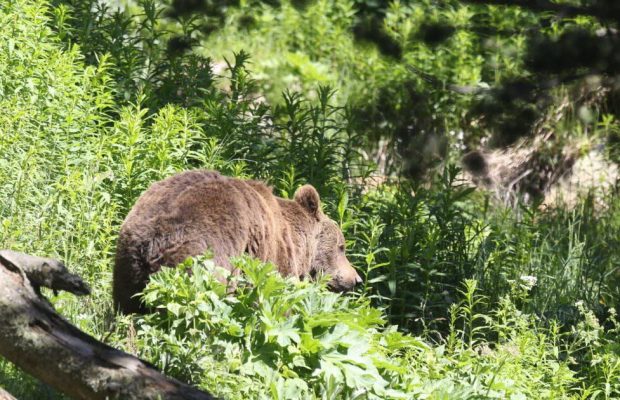 An Italian police officer survived an attack by a young, male bear. The attack happened when the bear jumped at the man and knocked him to the ground. Witnesses described the incident as an unprovoked attack.

The carabinieri officer injured in the attack is Diego Balasso, who was walking with a friend near a lake in the city of Andalo. The police officer said in an interview with Corriere della Serra that at one point, they heard a noise, like a branch breaking. He then saw a black silhouette of an animal and noticed it was a bear. He yelled at his friend not to move and tried to remain motionless.

The police officer said the bear stood up and started to smell him. The animal then tried to lower itself and bite his knee. Balasso said that he took a step back but was attacked in the leg and thrown to the ground. He threw his phone at him but he kept dragging him.

The attack ended when his friend’s brother and other people that were nearby chased the animal from the area. The officer was left with injuries to the head, arms, legs, and abdomen but they are not serious injuries.

Bears are no strangers to the area since they have been there since the early 2000s. They were reintroduced to the area after the population dropped to four. The population is close to 100. But the recent attacks and incidents have sparked a debate on the presence of the animals in the area.

The bear involved in the attack was tracked down, city authorities said through a statement. The animal was captured after they used a tranquilizer dart. The capture came just a few hours after the attack.

Bears In Some Parts of Italy

Bears have been making news in Italy over the last few months. In late July, a brown bear went viral after he escaped from an enclosure that had been secured to prevent him from escaping. The bear was surrounded by an electrified enclosure but that wasn’t enough to stop him from making another attempt.

The bear received the nickname Papillon, a character of a novel based on escaped convict Henri Charriere. Officials said it was not the first time that the animal had made such attempt. He had fled his cage multiple times before he broke through the enclosure in July.

A spokesman for the National Institute of Wild Fauna said that the animal was first recaptured on April 28. But the animal was gone once again just a few hours later. The bear is part of a project to reintroduce them to the area. The spokesman said the goal of the project was for the animals to disperse. But the animals never really moved to other areas and instead became fearless to humans and livestock. Reports say there have been a number of attacks in the region. Local authorities often track down the animals and identify those behind the attacks.