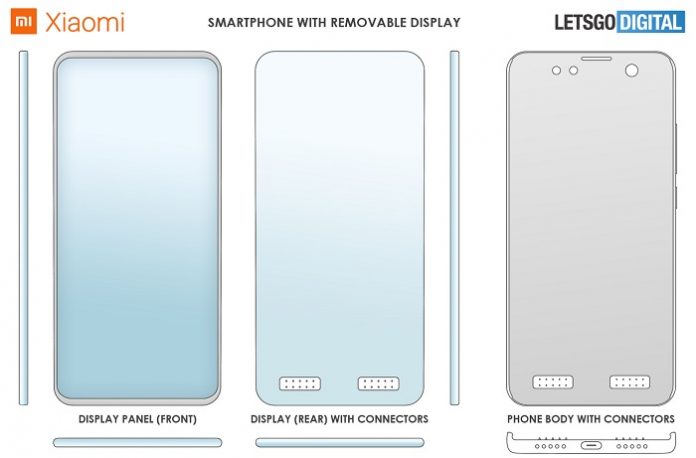 Xiaomi has been on fire when it comes to patents with unusual designs. The latest patent is once again about a smartphone but with a detachable display. The information comes from LetsGoDigital, which has revealed plenty of details on Xiaomi’s patents in the past.

The latest design appears to be somewhat of a modular phone. In the images, we can see that there are two separate parts to the smartphone. The phone’s body and display both have connectors, allowing the device to be easily taken apart.

A similar design has been attempted in the past through modular phones. Among the attempts was Google’s Project Ara, which ran into some issues and was later suspended. The initial plans were for the phone to be as affordable as possible but allow buyers to customize and make it better through different parts.

LetsGoDigital has an interesting view on the concept, saying that the screen and body would still be connected wirelessly even if the two parts were separated. This means that the screen could be used for other things. Notebookcheck reports that it could be used as a lightweight device for longer calls or gaming sessions.

This is simply a patent, which does not guarantee that the company will make and release this phone. The concept does sound quite interesting and makes us wonder what would have happened if phones such as the ones for Project Ara made it to the market.

Not the Only Interesting Idea

Xiaomi’s patent comes just days after at least two other patents made news for showing some unusual designs and features. A few days back, the company was in the news after reports of a smartphone with the ability to store wireless earbuds surfaced. The patent was brought to life by LetsGoDigital, which posted renders of what the phone might look like if the company goes ahead with the design.

The renders show what appears to be a regular smartphone with a large screen. The only difference between this smartphone and the others is at the top. The renders show wireless earbuds that can be placed at the top and pushed into the device. It was also reported that the earbuds could be used as built-in speakers.

A few weeks back, the company was also in the news over leaked images of what many think is a design for the next Xiaomi Mi Mix smartphone. The design was quite different from any of the releases in the series. This design shows a normal smartphone but with physical buttons on the edge of the screen. The buttons are usually placed on the side of the phones but this design changes things.

Xiaomi has been very quiet when it comes to a new Mi Mix device but the design would be another change for the series. The latest release in the series introduced a slider mechanism that reveals the front camera. Before that, the series had kept a similar design.

Xiaomi appears to be coming up with some interesting designs. We don’t know if they will ever hit the market but it is always interesting to see much different designs and features.