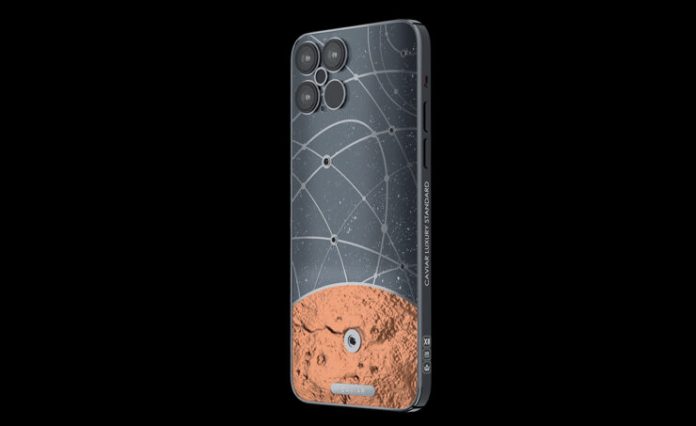 Luxury brand Caviar is always coming up with unique editions for smartphones that are available or haven’t even been announced. The latest announcement from the brand involves a phone that hasn’t been officially released. That phone is the Apple iPhone 12 Pro.

The earliest the phone might be unveiled is next month but this hasn’t stopped the luxury brand from coming up with a special edition. In recent weeks, several leaks have given a preview of what the design might be. Case makers, stores, and other businesses believe the design is what they have been seeing over the last few weeks.

With all the leaks and info out there, Caviar has decided to come up with a ‘Space Odyssey’ lineup of iPhone 12 Pro. This lineup features rare materials on the back of the device, making it super expensive.

The back of the Caviar iPhone 12 Pro features a space theme but the expensive part is on the bottom. All of the editions are decorated with rare materials. The cheapest of the ‘Space Odyssey’ lineup is the $5,830 ‘Space Odyssey Moon’ model. There are two other editions, including the ‘Space Odyssey Mercury’. That edition starts at $6,600 for the variant with 128GB storage. If you want the Mercury edition with the most storage, you’ll have to spend an extra $1,150.

The cheapest of the Caviar lineup is enough to get you at least three or four regular iPhones. But these creations by the luxury brand have a mix of rare materials. In the past, the brand has done the same with other releases. These phones are very expensive but this is far from the highest.

Not too long ago, the company released a pair of Gold Apple AirPods for a whopping $67,000. The company also released multiple special editions of the latest Apple iPhones, including some with diamonds on the back.

Caviar appears to be very informed on smartphones since the brand is no stranger to announcing editions of phones that have not been officially announced. Back in 2019, the brand announced a Game of Thrones Samsung Galaxy Fold. The foldable phone had been delayed the month before and it was unclear if the device would be released any time soon.

Other Editions From the Luxury Brand

That didn’t stop the brand from announcing the special edition of the phone. The announcement came shortly after the end of the series. The GoT Galaxy Fold and other phones from the brand are limited edition, which means only a few are made. In some cases, the item is so expensive that only less than ten are made.

The Apple iPhone 12 Pro is likely coming in the near future. It probably won’t be long before the brand announces another edition since Apple and Samsung phones appear to be their favorite choices.

Are you waiting for the Apple iPhone 12 Pro? What features do you think the new iPhones need? Let us know in the comments.