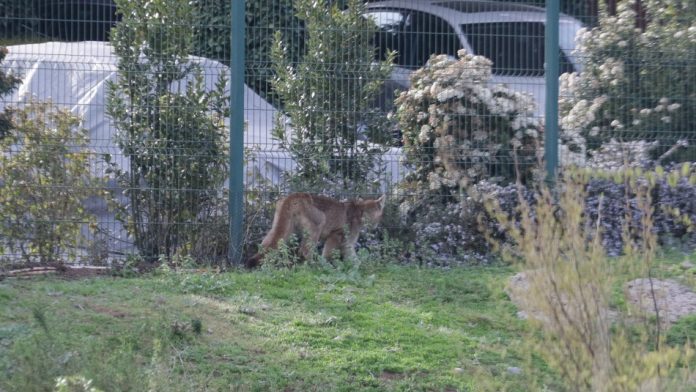 The video taken during the early hours of Wednesday ends with the cat climbing up a tree and jumping to another backyard. The cat was one of three that were spotted in the area by residents.

Officials said the cougar was spotted wandering around with its mother and another cat. Zoo officials and police officers worked together to capture the cougar. The two other cats were not captured but authorities said they would resume the search at night.

Several Cougars Have Entered the City In Recent Months

The cougar sightings are one of many that Santiago residents have reported during the coronavirus lockdown. Earlier this year, a cougar went viral when it was spotted wandering around the city. The cougar was captured and later released outside of the city.

The sightings continued shortly after, with one found near a home and another outside of a school. Most of the sightings have ended with authorities capturing the animals and releasing them to the wild.

The sightings appear to have increased during the lockdown. Experts have said that the empty streets at night and the lack of noise have attracted many of them to the city and nearby areas.

Several communes are looking to return to normality by entering a different phase where residents are no longer required to carry permission to be outside. The country does have a curfew that starts at 10 PM, which leaves most of its streets completely empty at night.

Experts believe the drought and search for more food has attracted the cats into the city. Santiago has a population of nearly seven million people but many are still working at home and go outside when it is necessary.

They Will Continue, Experts Say

Zoo officials believe the sightings will continue. Alejandra Montalba, director of the National Zoo in Santiago, said that they are going to have to get used to the presence of cougars, adding they are here to stay.

There is no official number on the sightings during the lockdown but this is one of at least five that have been reported in the last few months. Chile is one of many countries that have seen wild animals wander into areas that they don’t usually enter. Back in May, Turkish media reported on a huge flock of sheep that was spotted walking on what’s usually a busy road. The animals were spotted in the city after the area went on lockdown due to the virus.

Snapdragon 875: The Smartphones In Line For the New Processor

Oct 21, 2020
The Snapdragon 875 processor is coming and there is one company that could be ahead of the others when it comes to having this...