A new Xiaomi patent has surfaced and this one seems to be focused on a foldable phone that offers a bit more. The latest patent has been brought to life with a concept from LetsGoDigital.

The patent hints at a foldable phone but there is also a nice twist to the device since it offers another display when completely unfolded. The device is now being called Xiaomi Mi Z Fold by several tech sites.

Notebookcheck points out that one of the bad things about the device is the thickness. The closed up device is very thick, which would make it difficult to put in a pocket. The patent also appears to hint that there will be no main camera so the user will have to unfold the device or use the rear camera setup to take pictures or videos.

Just a Patent at the Moment 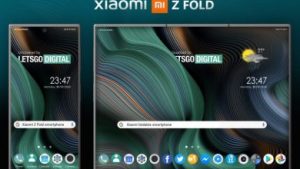 This is simply a patent so no one knows if the company will go ahead with this idea. It is interesting to see that Xiaomi’s device could offer something else, being almost like a smartphone/tablet combination.

The Chinese smartphone giant has not released a foldable device but it has teased one in recent years. The teasers from the company have shown a device that folds but there has been no other information. One of the most recent came in a short video that showed part of the design.

Other Ideas From the Company

The company has announced other concepts and phones that have stood out so an idea like this is not crazy at all. Last year, the company announced the Mi Mix Alpha, a device that came very close to being foldable.

The Mi Mix Alpha was shown with a wraparound display and several other features. The release was delayed and it was later confirmed that the company had no plans to make a release. We also have to point out that Xiaomi seems to be focused on different designs. Over the last few months, we have seen reports on several patents. There was one patent that showed a design that can store wireless earbuds inside the phone.

Several other companies have already entered the foldable phone race. The first announcement came from Royole and its FlexPai phone. But Samsung and Huawei quickly followed with their own foldable devices.

Motorola entered the race this year with the Razr and the company already has an upgraded version known as the Razr 5G. Samsung and Huawei have also released new variants of their foldable phones throughout the year.

Xiaomi is known for bringing solid devices at very good prices. The foldable phone market currently offers some very expensive foldable devices so an affordable or cheaper foldable device from Xiaomi would be good for those who want to try the technology.

Are you a fan of foldable phones? Are you planning to get one in the near future? Let us know in the comments.

Upgraded PS5 Titles Will Still Work On the PS4

Oct 23, 2020
The release of the PS5 is getting closer and closer but one of the big questions is how everything will work going from the...