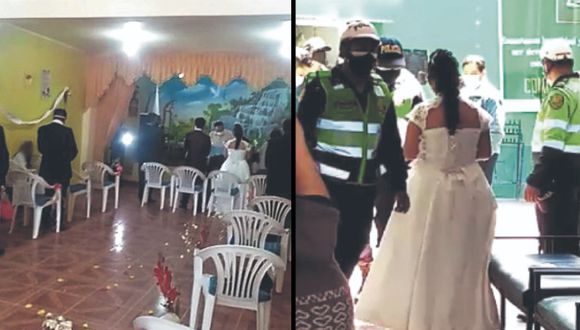 Peruvian authorities showed up at a wedding to arrest just about everyone that was there. The two getting married, the guests and the pastor were some of the people detained by authorities after they were caught breaking the lockdown rules.

Authorities in the city of Huancayo said on Sunday that the group had been detained for breaking the rules that have been in place since the coronavirus pandemic. The ceremony was taking place in the city, where there are measures to keep the virus from spreading.

Group Arrested After Authorities Are Alerted

A police official told local media that they were holding a wedding and that is prohibited since it breaks the rules of having large groups in a small area. The police official went on to add that what they want the population to understand is that social gatherings are not allowed.

Authorities reportedly showed up at the wedding when the pastor was going to ask them the most important question. La Republica reports that the event was suspended and all of the group ended up at the police station. RPP Noticias says the group attempted to tell authorities that the event was a family gathering. The group reportedly paid a fine and were released after a few hours.

A video posted by RPP Noticias shows the exact moment when police instruct the group to exit the area. The surprise appearance by authorities came after residents alerted them of an event being held there. The owner of the property was detained along with the group.

Peru has kept most of its lockdown rules since the start of the pandemic. The South American nation was once among the lowest in the region when it came to confirmed cases. But the number has quickly increased over the last few months, forcing officials and authorities to suspend some of the plans to ease back into normality.

Other countries in the region have kept strict lockdown rules during the pandemic. Chile still has a curfew for most of its populated areas and authorities require residents to carry permission to be outside. Authorities there have made numerous arrests of people caught breaking the lockdown rules. In some cases, authorities have arrested large groups after they were caught playing soccer or partying.

In Argentina, the government suspended flights early on to prevent the situation from getting worse. Reports say the country is planning to resume some flights in the near future. Colombia also suspended flights and many of the rules remain since the country has seen a high amount of cases. All four are currently in the top 15 for most confirmed cases.

Jan 11, 2021
The NFL Playoffs have just begun but there are several teams already looking into the future. Among those teams are some that are looking...