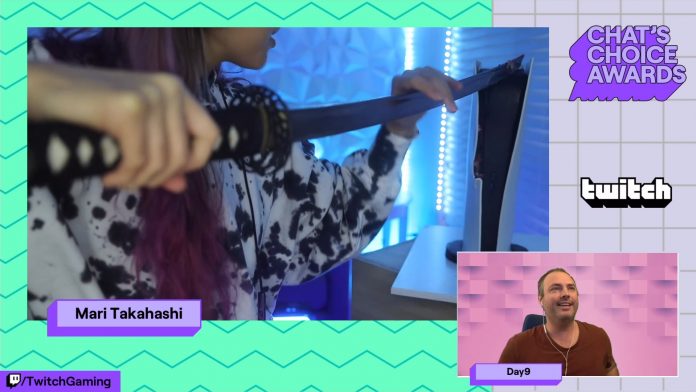 Twitch had a little fun with people who tuned in to see information about Sony’s upcoming console, the PlayStation 5. Late Thursday, thousands of viewers watched a stream that appeared to be getting ready to reveal more on the PS5.

It all seemed real since the Twitch stream for the Chat’s Choice Awards had what appeared to be a PS5 in the background. Even the official Twitch Twitter account posted about it, making it seem like there would be some important information announced during the event.

PS5 In the Background

The PS5 sat in the background and thousands of viewers couldn’t wait for the segment to start. At the start of the stream, the hosts even hyped things up by addressing what was being teased and revealed that they would talk about it later.

The stream went on for a couple of hours before it turned its attention to the console. Host Mari Takahashi, who had what we all thought was the real console in the background, turned her attention to the heavily anticipated console. But it turned out to be a bamboozle from the event.

Not a Real PS5, All Cake

GamesRadar reports that the stream lost thousands of viewers within minutes. The whole thing worked out for Twitch since it managed to bring in a large audience. But many were probably disappointed to see that it was simply a troll job by the event.

The PS5 was announced earlier this year and later unveiled by Sony. The console’s first appearance came during the end of a live stream held by the company. The live stream was mostly about the games that will be available for the PS5 in the near future. The stream did confirm that there will be two variants of the console, one with no disc drive and another with it.

The console’s brief appearance didn’t reveal much details. Sony has yet to announce the price or release date of the console. There’s also lots of confusion on the whole pre-order process. A few days ago, Sony announced that there would be a registration process for the chance to be selected for a pre-order.

The registration does not guarantee a pre-order and it has been revealed that those who are selected will have a limited time to finalize the process. The process will also be limited to one PSN ID, allowing those selected to pre-order just one console.

More PS5 news are expected in the next few days or weeks since the console is rumored to be coming at the end of the year.

Were you watching on Twitch? Are you planning to get a PS5? Let us know in the comments.