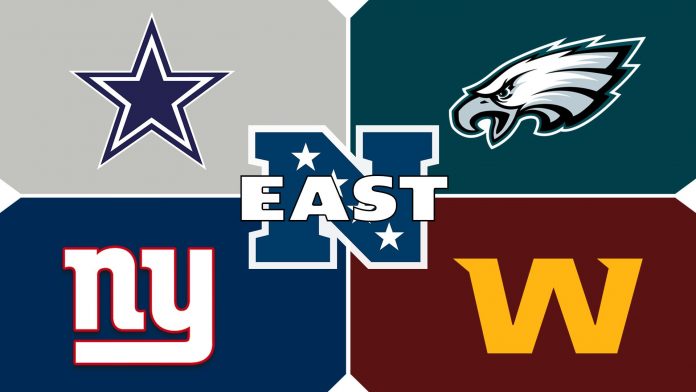 The NFC East has been a mess so far, with all four teams currently with a negative record. The division was not so great last year, with the Eagles getting the playoff spot after the Cowboys failed to get the must needed win. But the NFC East has been even worse this year and there is a chance that its playoff team could make it with a record under .500. Here’s how every NFC East team is doing so far:

The New York Giants have a 1 and 5 record but are far from eliminated. The team actually has a hope of getting into the playoffs by winning the division after beating the Washington Football team on Sunday. It is still early in the season but the division has a combined five wins and a tough schedule is still ahead for some of its teams.

The Washington Football team is last in the division with a 1 and 5 record. The Giants have the same record but they have the tiebreaker after their win on Sunday. Washington kicked off the season with a division win against the Eagles. That has been the only highlight so far as the team is struggling and thinking about a QB change for the future. Reports have said that the team is looking to move on from Haskins, their number one selection less than two years ago.

The Dallas Cowboys are leading the division with a 2 and 3 record. The division leaders are coming off a win against the Giants. But things could be complicated for the team after losing Prescott to a serious injury. Dalton did lead the Cowboys to a comeback win in Week 5 but they have a tough opponent coming up, the Arizona Cardinals.

The Cowboys are one game ahead and that is a pretty comfortable lead considering how things have gone in the division. But the team’s two wins have come off huge comebacks so they will have to play better if they want to be over .500. The good news for them is that two of their next three games are against division opponents, Washington and Philadelphia.

The Eagles are second in the division with a 1 – 4 – 1 record. The season has been a mess for Philadelphia so far. The team struggled with injuries right away and things have not improved. Sanders and some of their key pieces have also suffered injuries and could miss some time. The Eagles appeared to be on their way to a win in Week 1 but Washington came back and scored 27 points straight. The only win so far is against the 49ers, who also came into that game with a number of injuries. The Eagles are coming off a loss against the Ravens. The game was close towards the end but the team failed to score a two point attempt that would have tied the game.

The NFC East has been bad so far, will it improve or will we see a team under .500 in the playoffs? Let us know what you think in the comments section.

Jul 20, 2021
Braun Strowman has not announced where he will compete next but people have spotted something that hints at his return to the company. Strowman,...