The Release of the PS5 Is Exactly a Month Away 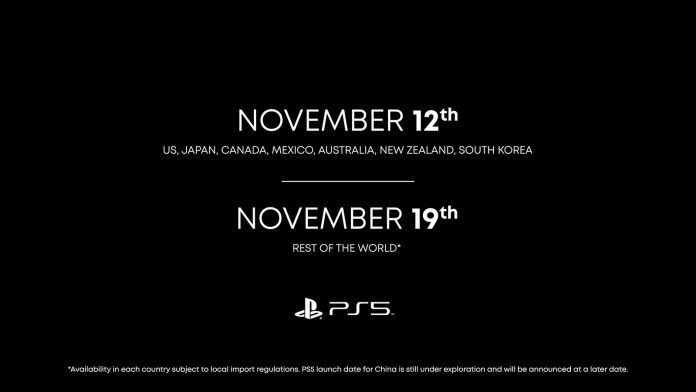 It is October 12 and that means the PlayStation 5 is exactly a month away from its release. The upcoming console has confirmed a number of games and one PS Plus benefit for those who will get the system on launch day. Here is everything you need to know about the PS5:

November 12 (US and Other Markets)

The PlayStation 5 is coming on November 12 for markets such as the US, Japan, and Australia. The gaming system will be available in other markets just a week later so the wait won’t be long for the rest of the world.

The console was unveiled a few months back during a Sony live stream. The brief appearance confirmed the release of the standard and digital edition. There were also a few accessories shown during that brief appearance.

The launch day of the console will arrive with a number of new titles. One of the most anticipated titles is Spider-Man: Miles Morales. The second release of the Spider-Man series will also debut with a remastered version of the first release, which is a PS4 exclusive.

There will also be a number of titles that will be available for upgrade when the console is released. Among the video games is FIFA 21, Madden 21, and Cyberpunk 2077. FIFA 21 and Madden 21 are already available for the current consoles but EA has announced a free upgrade program for those who move to the new consoles. Other game developers have taken a different route on the upgrades. The NBA 2K series offers one but it has been confirmed that it will be tied to the Legend Edition only. This means that players will have to own the $99.99 Legend Edition of NBA 2K21 if they don’t want to buy the game again for the new console.

The price of the titles is also a question mark at the moment. The NBA 2K21 PS5 edition has a price of $69.99, sparking rumors that this will be the new price for video games. Other game developers haven’t confirmed that but have said they will look at that with every release.

PS Plus Collection for PS5

Sony has also announced a nice little program for those who are subscribed to PlayStation Plus with the PS5. The service will have a number of PS4 classics available right away. The list includes games such as The Last Guardian, Days Gone, God of War, The Last of Us Remastered, Persona 5, and Infamous.

Launch day titles are usually limited so this is great news for those who haven’t bought a PS5 game or are simply not interested in the titles that will be available right away.

Have you preordered a PS5? Which launch day titles are you getting? Let us know in the comments.