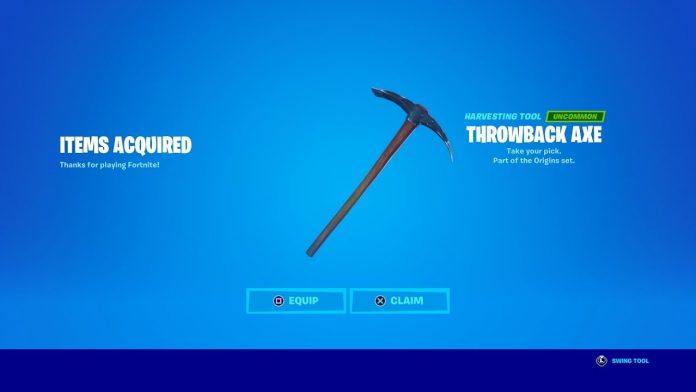 Battle royale game Fortnite is giving away an item that many players had available when they first started playing. The game has been out for a few years now so many players arrived during Chapter 2 and that means they didn’t receive the original pickaxe.

The Original Pickaxe was an item that players started with during Chapter 1. The pickaxe doesn’t feature a unique design, it’s simply a normal pickaxe. But it has become sort of rare since it was not given out to new players during the launch of Chapter 2.

Now, Epic Games is giving it away for free. But those who want it will have to put in their credit card information, according to Screenrant. The battle royale game has given out plenty of free cosmetics in the past without requiring this information so it is a bit strange to see that happening now.

The return of the pickaxe was announced earlier this month. A few hours ago, the item arrived to the game along with the original default skins. The Original Pickaxe is not given to players when they start the game. Screenrant reports that the item is listed under the Limited Time Offers section. The gaming news site says that when tested on the PlayStation 4, the player was required to enter their credit card information even though the total cost of the purchase was at $0. This is a strange process for a game that has often handed out free cosmetics without requiring anything.

It is still cool to see an item return after being such a common one during the first seasons of Fortnite. The first default skins have returned as well but those are available in the Item Shop. If you played Fortnite early on, you have these skins since they were the first thing you had after launching the game.

Fortnite is planning to continue its great run on the upcoming consoles, the Xbox Series and PlayStation 5. The game is getting some upgrades that will make it look even better. Both consoles will be released in just a few days so it won’t be long before players experience the upgraded battle royale game.

If you haven’t played Fortnite, the game is basically a battle to be the last one remaining. The match starts out with a number of players while a circle closes in to make the map smaller. The game also offers limited time modes and challenges for players to complete while competing in the matches.

Fortnite does have a different ingredient over other battle royale games. The Epic Games title offers the mechanic of building to create cover and get to higher places. The game’s building mechanic was once a little complicated but many players have now mastered it and made things even more competitive.

Fortnite is a free to play game available for platforms such as Switch, PS4, Xbox One, and PC.