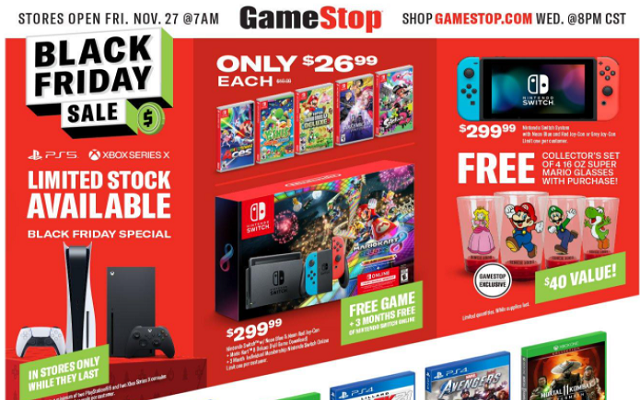 Black Friday is just around the corner and GameStop is offering a ton of deals for the PS4, Switch, and Xbox One. The retailer will also have a few PS5 and Xbox Series X consoles in stock. Here are the top discounts and everything you should know about GameStop’s Black Friday deals:

NBA 2K21 ($30) – The game was released a few weeks ago so its original price is usually $59.99. The latest game in the NBA 2K series features a new career mode as well as the current NBA rosters.

Ghost of Tsushima ($40) – The PS4 exclusive, released back in July, is usually $60. The game has received good reviews for its story mode and it recently got a multiplayer expansion that is free for all owners of the game.

Star Wars: Squadrons ($17) – The game debuted at a price of $40 so this is a big discount. The PS4 and Xbox One versions are both available at this price.

The Last of Us: Part II ($30) – The second game in The Last of Us series was released earlier this year for the PS4. Its original price is $60 but the deals from the retailer have it at $30.

Watch Dogs Legion ($37) – The title was just released but gamers can find it at $23 less. The game is available for PS4 and PS5 and Xbox Series X and S. Buying the version of the old consoles will get you a free upgrade for the new consoles.

FIFA 21 ($27) – FIFA 21 was released a few weeks back but gamers can find it at a very low price. Buying the version of the old consoles will get you a free upgrade for the new consoles.

Madden 21 ($27) – Madden 21 was released a few weeks back with a number of changes and new rosters. Buying the version of the old consoles will get you a free upgrade for the new consoles.

The PlayStation Plus 12-month subscription, usually at $60, is available for $45. The subscription also has the same price through the PS Store.

What does it offer? The subscription gives PlayStation users the chance to play online games. There are also exclusive deals and free games every month for subscribers. Next month, the subscription will offer three free games, including Just Cause 4.

If you’re on the PS5, things are even better for the subscription. With the new console, users have the chance to download the PS Plus Collection, a list of games that are really popular on the PS4.

The Xbox Game Pass Ultimate is also being offered at a discount. The three months of the subscription, usually at $45, can be found for $30. This is a great time to be a member of the service since it just added EA Play to its lineup. This means that all games of the EA subscription are available for Game Pass Ultimate users at no additional cost.

These are just some of the discounts, there are plenty more that GameStop will be offering for Black Friday.