The NBA free agency period kicked off with some big moves right away. The Lakers, Heat, Celtics, and Jazz were some of the teams that secured their players or made signings to 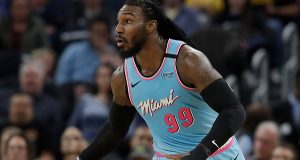 improve their rosters. Here are the big moves so far:

Donovan Mitchell and the Utah Jazz have agreed to a $195 million deal. The deal will keep the star player with the team for many years. Mitchell’s huge deal was celebrated by him jumping into a pool.

Gordon Hayward has agreed to move to the Hornets. Reports say the Celtics and Pacers were looking to sign him but it was the Hornets who won. Hayward now joins LaMelo Ball, who was drafted by the team last week.

The 2020 NBA Champions Los Angeles Lakers lost Rajon Rondo in free agency but they turned around and made big moves to improve their roster, including trades and signings for Dennis Schroder and Wesley Matthews. Kentavious Caldwell-Pope and Markieff Morris are returning to the team. Sixth Man of the Year Montrezl Harrell has agreed to a two-year deal worth $19 million. Marc Gasol is also joining the team, with JaVale McGee leaving to the Cavaliers in a trade.

Heat Bring Back Dragic and Leonard

Steven Adams has been traded to the Pelicans in a deal that is said to be part of the move that involved the deal with Jrue Holiday. OKC has now traded or let go of most of its 2020 starting lineup.

Jrue Holiday To the Bucks

The Pelicans have traded Jrue Holiday to the Bucks for Eric Bledsoe, George Hill and draft-pick compensation. ESPN’s Adrian Wojnarowski later reported the Pelicans will receive three future first-round picks in the deal.

Bleacher Report posted a more detailed explanation of the trade through the tweets and information from the analysts. Here is what Bobby Marks of ESPN said on Twitter:

Cleveland will receive a future second from Milwaukee by lifting the protection on the 2022 first (from the George Hill 2018 trade) that the Bucks owe them. Smart move by Cleveland to leverage an additional second.

Chris Paul To the Suns

Last week, the Suns acquired Chris Paul and Abdel Nader in a trade with OKC. In return, the Thunder received Kelly Oubre Jr, Ty Jerome, Jalen Lecque, Ricky Rubio, and a 2022 first round pick. Jae Crowder has also signed with the team.

Fred VanVleet is staying with the Raptors after agreeing to a four year, $85 million deal. The guard was an important piece of the Raptors NBA title in 2019.

Serge Ibaka To the Clippers

Serge Ibaka has signed with the Clippers in a deal worth $19 million. Ibaka played with Kawhi Leonard when they won the championship with the Raptors back in 2019.

Earlier today, the Nets made the re-sign of Joe Harris official. Harris deal is for four years and $75 million. The team also made another move earlier today, signing Jeff Green.

The Golden State Warriors have acquired Kelly Oubre Jr. from the Thunder for draft picks.