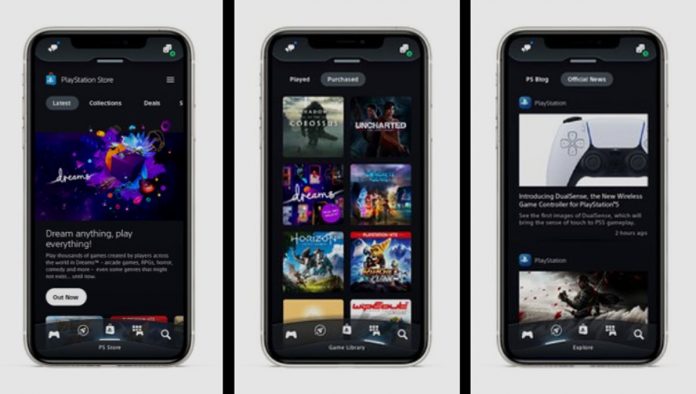 The PlayStation App has a new look days before the PlayStation 5 is released. The app, which is available for Android and iOS, remained nearly the same during the PS4 era. But now, there is a new console coming and Sony has made changes to give it a new look and add a couple things. Here is what’s new with the updated PlayStation App:

New Theme for the App

Once you launch the PS App with the update, you’ll immediately notice that there’s been some changes. The app has gone from the white and blue theme to a dark theme. The blue icon next to the friends list icon is now green.

Quite the change but it looks pretty nice and much more organized than the old version.

In the previous version of the PS App, users had to look around for the different options. The PS Store was one of the many that was not available with the touch of a button. Now, you’ll see it right after opening the app. At the bottom, there is a number of buttons that you can hit to get to the PS Store and other features.

Your game library can be seen with the touch of a button too. PlayStation has also added an Explore button to make news and information easier to find. The button includes PS blog information as well as some news you might find interesting.

When opening the app, you’ll see a number of icons on the top and bottom. The notifications icon can be found next to your username/name on the top. It is a little bell that you can click to see the invites and messages you have received.

The notifications also pop up on your phone if you decide to. This was available with the previous version of the PS App but it is nice to have it back.

Friends and messages are now found in the top left and right of the screen. Messages is a big change for the app since the feature had a separate app before. Now you can easily message your friends and see all your past messages. The friends list along with the number of people online can be found on the top right of the screen.

The changes to the PS App rolled out a few days back but users reported that they were not all receiving the update. If you still have the old PS App, you can check for new updates through the stores where the official app is available.

The changes come as Sony is getting ready to release its PS5. The new console will be released in the US and other parts of the world on November 12. Sony has already introduced a number of changes to the PlayStation 4 with an update that was released last month. The update includes a few things that are part of the PS5.

What do you think about the new look of the PS App? Let us know in the comments.