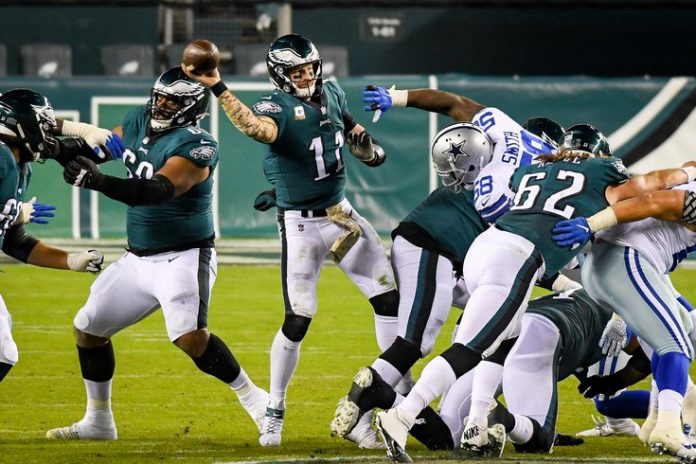 The Eagles and Cowboys faced each other in a Sunday Night Football game that looked like a must watch before the start of the season. Things haven’t gone well for the two teams but the schedule was set and they both took the Sunday night slot to compete for the top spot in the NFC East. Here’s how it all went:

The Eagles were down early in the game after the Cowboys scored a field goal on their first drive. But they were back on the field again after Wentz was sacked, forcing a fumble that left the Cowboys with good position.

The Eagles defense stepped up and forced a fumble to regain possession. This would lead to a TD but that was about it for the Eagles in the first half. The Cowboys marched down the field with little time left in the second quarter to kick a field goal and take a 9 – 7 lead at the half.

Those would be the last points of the Cowboys since the Eagles made several plays on defense to shut down the offense.

The Cowboys defense played much better than in previous games. The team did not fall behind early in the game and forced several turnovers. Wentz had four turnovers in total, with two of them being interceptions.

This is the second straight game in which the Cowboys fail to score a touchdown. Last week, the team only scored three points against the Washington Football Team.

Carson Wentz has been sacked 32 times this season, most in the NFL. Second is Joe Burrow with 28. Wentz is also the interception leader with 12, two ahead of second place Kirk Cousins.

The win by the Eagles last night gives them the top position in the NFC East at the moment. All four teams still have a negative record but the Eagles will have the chance to even their record when they come out of their bye week.

The loss dropped the Cowboys to third in the division but all teams still have a chance at a playoff spot. Last place New York Giants are only two games behind for the division lead. The Giants could gain ground in the division if things go right for them. Their next two games are against division opponents, Washington and the Eagles. The Giants have already played both of them, with the games being very close.

The Cowboys don’t have an easy schedule ahead. They have to play the Steelers next and they will then play the Vikings in Week 11. Andy Dalton might be back for those games after being ruled out for last night’s game.

The division has been really bad to this point and there is a chance that the division winner could make it to the playoffs with a negative record. It wouldn’t be the first time that’s happened since the Seahawks and Panthers did it some years back. Both teams actually won their first playoff game.

The Eagles are now in their bye week, which is a good thing since they have been struggling with injuries and this will give their players much needed time to recover. Several of their injured players could be back for Week 10.