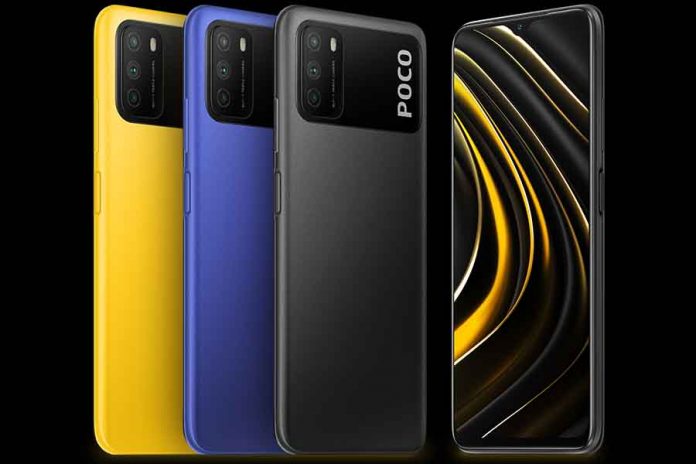 The Poco brand has been making impressive releases throughout the year. The majority offer a really good price but some stand out more than others due to their specs or unique features. One of the latest releases from the brand is quite cheap but it offers something that other releases don’t, a huge battery.

Xiaomi’s Poco sub-brand has launched the Poco M3. The specs are quite interesting but the highlight is easily its big battery. Let’s get to some of the specs first before talking a bit more about the battery.

The smartphone has a 6.3-inch display with a waterdrop notch that houses an 8MP front camera. The display is pretty much the same as the other affordable phones out there. One little difference between the M3 and the others is that the company has decided to feature the fingerprint sensor on the power button on the side.

The back of the phone stands out a bit because the brand has made the entire section of the camera into a glossy piece with the word Poco in a bright white. There is a triple camera along with a flash. The main camera is 48 MP but the two other cameras are just 2 MP sensors for depth and macro. The rest of the back has nothing else.

The processor is a Qualcomm Snapdragon 662, which features 4 GB of RAM. The smartphone comes with MIUI 12 on top of Android 10. The phone offers two variants, one with 64 GB and another with 128 GB of storage. There is also two sim card slots.

The highlight of the Poco smartphone is the 6,000 mAh battery. Battery is quite important in smartphones today and owners of this device should have no problems with the M3. The huge battery for this device makes it an attractive option for those looking for a smartphone at less than $200.

The back of the phone isn’t impressive and the display is nothing that stands out. But the battery alone is what makes this a really solid release by the brand. The price of this smartphone is just $129.

The Verge reports that the company is putting the Poco M3 on sale online on Black Friday, November 27. The tech site reports that early US pricing starts at $129 for the 64 GB storage variant. The 128 GB variant isn’t that much expensive at $149. You can check out everything about the Poco M3 on Poco’s official website.

Back in October, a company official teased another product launch for the year. The product was not revealed but the post sparked rumors of a Poco F1 successor. The Poco F1 was one of the phones that caught the attention of the tech world a while back and fans want to see more versions. The post has also sparked rumors that the brand is preparing a totally different phone.

What do you think about the Poco M3? Let us know in the comments.