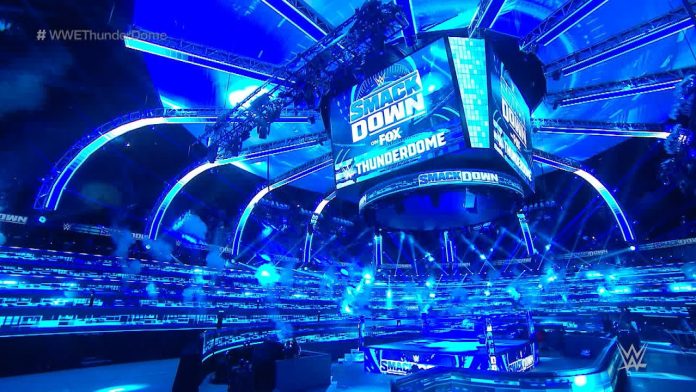 WWE said on Thursday that it is leaving the Amway Center in Orlando, Florida, and moving to Tropicana Field located in Tampa Bay. The new location of the ThunderDome will begin with the episode of SmackDown that will be airing on December 11.

The episodes of Raw and SmackDown will continue to take place there. The news were confirmed by the Tampa Bay Rays president, who revealed that the ballpark will be transformed to host the spectacle of WWE ThunderDome.

WWE was one of the few that didn’t completely shut down when the pandemic began at the start of the year. The company instead switched things up and took its events to its Performance Center in Orlando. The events were initially held without an audience but the company later featured talent and staff members in the crowd.

The sports entertainment company set up the ThunderDome back in August. This came after months and months of the company changing events. This year’s Wrestlemania was originally set to take place in Tampa Bay but that was later changed and held without a crowd. Several other big events were also held without a crowd.

The ThunderDome features large LED screens that show virtual fans. The screens surround the ring, similar to how it would be if there were fans attending the show. The system is similar to what the NBA used for part of the season during the bubble. The basketball league featured large screens where fans could be shown. The system was used throughout the end of the regular season and the playoffs.

Brian Flinn, WWE’s Chief Marketing and Communications Officer, said that the new residency will enable them to continue offering an unmatched live spectacle and would not have been possible without the strong support of the Tampa Bay Rays organization. He finishes by saying that they remain grateful for the hospitality provided by the Amway Center over the past four months.

WWE’s next big event is Survivor Series 2020. The event is famous for featuring matches between the brands and this edition appears to be no different since the match card already has battles between superstars from the Raw and SmackDown rosters.

The event, which will take place on Nov. 22, will feature the ThunderDome. There are currently six matches in the match card. Here are the six so far: