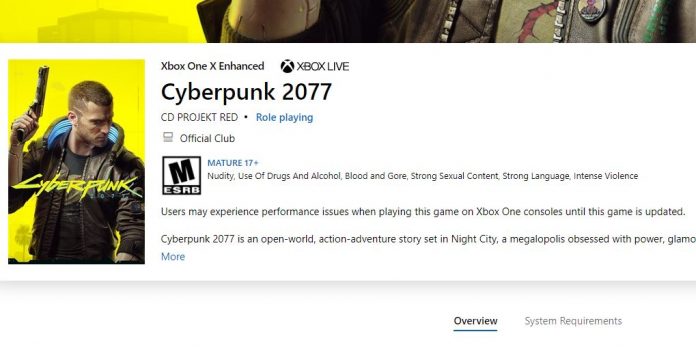 Microsoft has made a small change to the Cyberpunk 2077 page on its store. The change now warns customers about the game’s performance on the Xbox One console. The Xbox One, released back in 2013, was one of the systems to get the game a few days back. But there have been numerous complaints from owners of the system.

This is what the page now has for the game:

“Users may experience performance issues when playing this game on Xbox One consoles until this game is updated.”

Microsoft’s change comes days after complaints began surfacing on its performance. The heavily anticipated game appears to have some issues, especially on the older consoles, the Xbox One and PS4. The warning is displayed right next to the cover of the game seen in the page.

The performance issues have sparked numerous complaints from players. Some have described the game as unplayable at times while others have requested a refund. Microsoft has not removed the game from its store and instead has decided to add the warning for those who are thinking about buying the game and have the Xbox One.

The situation with the game has been completely different on the PlayStation side. A few days ago, Sony decided to remove the game from its store. The game is no longer found digitally and it is unclear if the company will bring it back any time soon. Before Sony’s decision, there was some confusion on the refunds. At first, gamers were having their requests denied. But now, both Microsoft and Sony have confirmed refunds for the game.

The game developer behind Cyberpunk 2077 released a statement shortly after the game’s debut. The statement apologized for the situation and also confirmed a number of patches that will improve the game. The game developer did not give any release dates for the patches but did make it clear that they would be starting soon.

Cyberpunk 2077 is one of the last big releases of 2020. The game was initially announced back in 2012 but gamers got to see more of it again in 2018. The game’s hype grew with the trailers and every piece of information that was announced.

Are you having any issues with the game? Have you requested a refund or are you waiting for the patches? Let us know in the comments.