Motorola Announced As the Official Patch Partner of the Brooklyn Nets 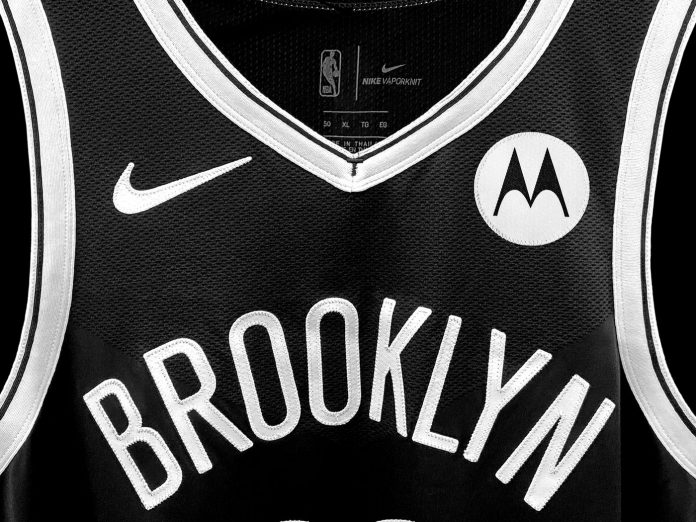 The Brooklyn Nets and Motorola have agreed to a partnership that will bring the two together at the start of the 2020 – 21 NBA regular season. The partnership will include the famous Motorola logo on the front left shoulder of all Nets jerseys.

The partnership with the NBA team will also feature Motorola on the lower abdomen area of the team’s practice jerseys. The tech company will also have a branding presence on the team’s home court. Motorola will be serving as the Official Smartphone Partner of the team.

Motorola is behind many smartphones, including the return of its classic phone, the Razr. The phone returned earlier this year in the form of a foldable phone. The official NBA site reports that the smartphone partnership is with the intent of further raising the profile of the beloved razr.

The tech company will also be doing a few other things during the partnership with the NBA team. One of those is working in the Brooklyn community to bring STEM educational programs to underserved youth and the donation of Motorola smartphones to support virtual learning for homeless students, according to NBA.com.

The Motorola logo will be seen a lot during the NBA season since it will be part of the jersey. But the tech company could also have a chance to make more appearances if the team does well during the season. The Nets are among the teams that could take the top spots in the Eastern Conference.

Not too long ago, the team made two huge signings in Kevin Durant and Kyrie Irving. Both players, who have won championships in other teams, make the Nets a favorite in the conference. Durant and Irving were both part of the team last year but Durant did not play since he signed with the team shortly after suffering an Achilles injury that kept him out for the rest of the NBA Finals between the Warriors and Raptors. The injury also kept him out for the following NBA campaign. Irving did play a number of games but was ruled out for the rest of the season with a shoulder injury.

Nets Could Be Really Good

The injuries did not stop the team from making the playoffs. The Nets made the playoffs as a seventh seed, getting the champions, the Raptors. The Nets were swept by the Raptors but the upcoming season sounds promising since they will have two stars. The team has also been mentioned as one of the places where James Harden wants to play. The Rockets recently traded Westbrook and could do the same if they receive a good offer from a team.