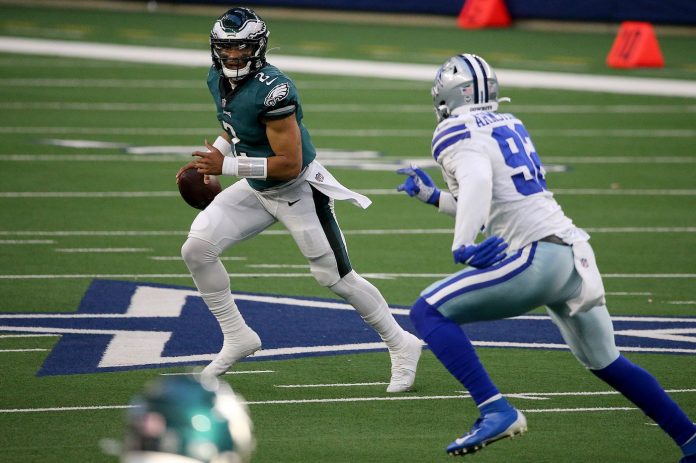 Pederson explained that he wants to continue to evaluate Hurts, who has only started a few games for the team. The move was expected, despite the big loss on Sunday against division rival Dallas Cowboys.

Hurts had a shaky performance in the second half of the game, turning the ball over three times. The Eagles lost the game 37 – 17 after starting with a score of 14 – 3. The team came in with playoff hopes but those ended after the Dallas offense couldn’t be stopped in the second half.

The Washington Football Team lost on Sunday and that kept the Eagles in the race. But that changed with a loss to the Cowboys later in the day. The Cowboys, Washington, and Giants are still in the race for the division title.

Pederson dismissed questions about the future of Carson Wentz, who was the starter for most of the regular season. The quarterback was benched in the game against the Packers and Hurts has been the starter since.

Wentz signed a big contract just a few years ago but has struggled after the Super Bowl season. The QB has suffered multiple injuries in the last two years and has failed to replicate the season he had back in 2017. At the time, many sports analysts had him as the MVP. Wentz suffered a torn ACL in a game against the Rams, leaving him out of the regular season and the playoffs. The team went on to win the Super Bowl with Nick Foles as the quarterback.

Wentz started the following season but was later shut down with another injury. He started all of last season but struggled at times. The team also saw multiple injuries, forcing them to bring in practice squad members.

Wentz recorded career low stats this year and struggled to get anything going against the Packers. Hurts came in and kept the team somewhat in the game. He was later named the starter for the game against the Saints, which was one of the biggest wins of the Eagles for this year. He started again against the Cardinals putting up some nice numbers in a loss.

Hurts shakiest game came last night when he made several turnovers in the second half, including two interceptions. The Eagles season will come to an end after the game against the Washington Football Team. Just a few hours ago, the Eagles division rival made sports news when it was announced that Dwayne Haskins had been released. The quarterback was drafted in the first round just two seasons ago. Haskins struggled throughout the two seasons and this year, the team went with other quarterbacks such as Alex Smith. Haskins started on Sunday but was benched in the fourth quarter.