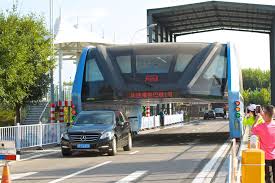 Back in early 2016, an interesting project in China made headlines across the world. The project, known as TEB (Transit Elevated Bus), quickly caught the attention of a lot of people since it seemed like a genius idea.

If you haven’t seen or heard about TEB, it was basically a giant bus that sat on tracks. The big difference between a regular bus and TEB was that China’s project moved on rails and over traffic. The bus had plenty of space on the bottom for cars to easily drive under, making this the perfect option for any city with traffic problems.

The TEB began its trial in 2016 and it sounded like the future. Testing took place in one city 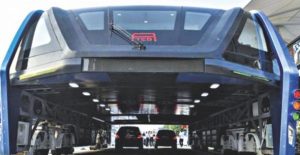 after tracks were built on a road. The bus was shown off to the public and it seemed like there would be more to come in the future. But the project was gone just as quick as it arrived.

After its launch, the bus, which could carry lots of passengers at a time, started being a problem for some residents, according to reports. Some reportedly complained that the bus was taking space from the road, leading to traffic problems.

Things for the project never got any better with reports saying that it had been abandoned shortly after its launch. The bus was now taking space and was seen as a problem for many residents who drove by that area every day.

The situation just continued getting worse as it seemed like all the people behind the project stopped talking about it. There were even reports that the workers and officials behind the project left shortly after the launch and that nobody had shown up since. The following year, it was all over as there were reports of workers in the area. But they were there to remove the tracks that had been put in place to test the bus.

The bus was taken away in 2017 and that was a bit of good news for residents who had to deal with traffic problems from the warehouse, bus and tracks that were abandoned.

The project seemed really good at first but it ended up disappearing very quick. There appears to be no indication that the country is planning to start things up again. The last time there was anything on the project was when the arrests were made back in 2017.