The English Premier League is nearly halfway done but nothing is close to being decided as only 11 points separate first place from tenth place. The league standings have changed a lot during the last few weeks and things will likely get interesting in the near future as many teams are looking to win the competition. Here are the top ten standings of the EPL after 18 matches played:

Manchester United are in the lead after a great run that has given them three wins and two draws in the last five games. The club has played 18 matches so the standings could change since second place Manchester City has played 17.

Next Game: vs. Fulham.

Manchester City has slowly climbed up the standings, now sitting in second place with a chance to take the top with a win next game. The club is perfect in the last five games, winning all and earning 15 points in the process.

Next Game: vs. Aston Villa.

Leicester City is in the title race and very close to the top. The club is just two points away from the top. 3 wins and two draws in the last five games have helped the club gain ground in the race.

Next Game: vs. Chelsea. 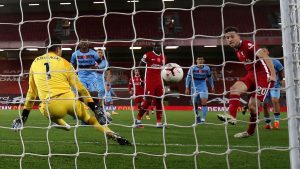 Liverpool have lost some ground in the last few weeks but the top is very close for the current champions. The last five games have not been great though, with three draws, a loss, and just one win. The club has lost some of its key players to injuries so things could return to normal once they return.

Next Game: vs. Burnley.

Tottenham is in the mix as well, with 33 points in 18 matches played. Mourinho’s team has won two games in the last five but could gain ground in the race if there’s a good result against Liverpool, a team they will play in less than ten days.

Everton are still in the race after a great start to the season. The club currently has 32 points and one less game played than Man U., Liverpool, Tottenham, and Leicester City.

Next Game: vs. Sheffield Wednesday (FA Cup 4th Round).

Chelsea have struggled during parts of the season but the club is only eight points back. The last five games include two losses but also a couple of wins that have kept them close.

Next Game: vs. Leicester City.

Southampton is in the mix after a number of good results. The club has beaten Everton and Liverpool in recent weeks. They were also in close matches against Manchester City and Manchester United.

Next Game: vs. Shrewsbury (FA Cup 3rd Round).

West Ham is close to the top five with 29 points in 18 matches played. The next big challenge for the club appears to be the match against Liverpool, which is scheduled for the last day of the month.

Next Game: vs. West Brom.

Arsenal are currently in the top ten since the club is winning 1 – 0 against Newcastle. The current result drops Aston Villa out of the top ten. If the game ends with a win, Arsenal will have 27 points.

Update: Arsenal is now up 2 – 0 against Newcastle.