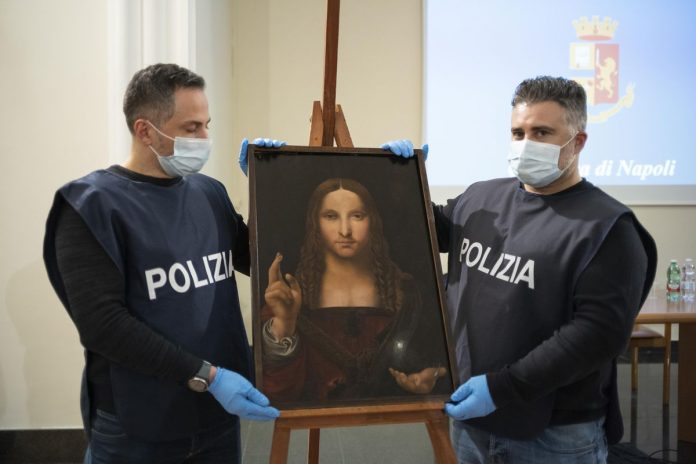 A 500-year-old painting has been found in an apartment and returned to the museum where it was being displayed. The painting was stolen but reports say staff was unaware that it was gone from the museum.

The painting is a copy of Salvator Mundi, which is thought to have been painted by one of da Vinci’s students. The stolen painting was found in a bedroom cupboard in Naples a few days ago.

The painting is usually at the Doma Museum at the San Domenico Maggiore Church. Naples prosecutor Giovanni Melillo told the AFP news agency that the painting was found on Saturday thanks to a brilliant and diligent police operation.

The Naples prosecutor said staff were unaware it had been stolen because the room where the painting is held has not been open for months due to the coronavirus pandemic. Authorities don’t know when the painting was stolen from the room. But the museum has said it was in its possession as recently as last January.

Authorities have said that the man living in the apartment was arrested on suspicion of receiving stolen goods. Police are currently investigating the theft of the painting but they have not found any signs of it being a break-in. The Naples prosecutor said it is plausible that it was a commissioned theft by an organization working in the international art trade.

The original Salvator Mundi painting is a famous piece and experts have done everything to keep it in good condition. Some of the efforts have not gone smoothly but this didn’t stop people from being interested when it was put up for auction three years ago. At the time, it was sold at auction for $450 million.

The painting is one of fewer than 20 known works by Leonardo. It is also one of Leonardo’s most copied paintings, with about 12 known copies by his students and other people.

The painting stolen from the museum is not the only piece that has gone missing in recent years. Back in late 2019, Italian authorities started investigating the discovery of a painting that had been missing for many years. Portrait of a Lady had been stolen back in 1997 and its location remained a question mark until authorities found it hidden in the wall of a gallery.

Authorities showed up to the gallery when a gardener working in the area made the discovery. The gardener was working on cleaning some ivy on a wall when a metal panel was found. The inside contained a bag with a painting.

One official said at the time that it may have been a theft in which the thieves decided to make a return some time later. The official spoke with La Repubblica newspaper and said that the discovery was strange because the area was checked after the theft. The painting was said to have been in excellent condition when it was found, even though 22 years had gone by. The painting was confirmed as the real one the following month.