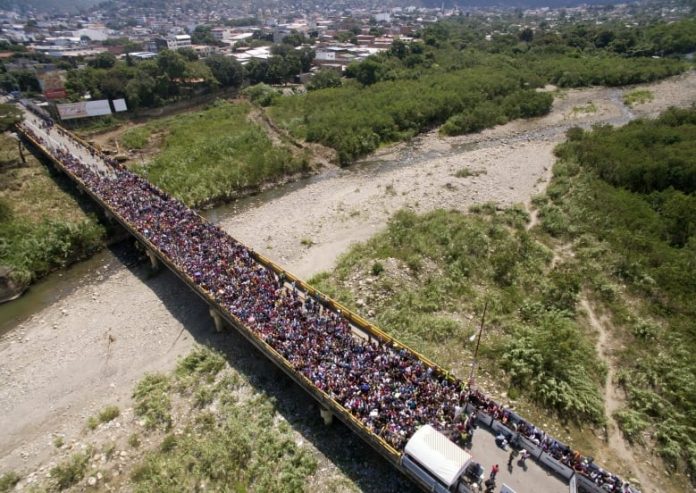 Colombia has announced that it will offer temporary protective status to nearly one million Venezuelan migrants. The announcement, which will cover the undocumented migrants there, will allow them to work in the country legally as well as access healthcare and other services.

The announcement was made by President Ivan Duque and the UN’s High Commissioner for Refugees Filippo Grandi. The announcement is big news for the nearly one million undocumented Venezuelan migrants. The country is said to have close to two million Venezuelans who have left over the years due to the political and economic crisis.

The move by the Colombian government will allow Venezuelans who are illegally there to apply for ten year residence permits. Reports say the move also covers those who already have temporary residence, allowing them to extend their stay in the country.

Colombia is one of the many countries that have seen a high number of Venezuelans over the years. Other South American countries have taken in many Venezuelans, including Peru, Chile, Argentina, and Ecuador. Some have already made moves to slow down the arrivals while others have introduced ways to provide temporary residences.

NPR reports that the announcement by the Colombian government covers the migrants who arrived before January 31 and those who enter legally during the first two years of the policy. The president also made it clear that those who don’t register under the new policy will eventually be subject to deportation.

Venezuela is currently in the middle of a political and economic crisis that seems to have no end in sight. Millions have fled the country since 2015 and experts believe the high numbers will continue since the situation has not improved.

Venezuela currently has Maduro as president but many don’t recognize him over the controversial presidential election held in 2018. The South American country also has Juan Guaido as the opposition leader and the person that most of the international community sees as interim president. Guaido has lost support recently but some countries have made it clear that they will continue to recognize him as the leader of Venezuela.

The UN’s High Commissioner for Refugees later made a tweet to show support for the act by the Colombian government.

Today Colombia gave an extraordinary example to the region and the world by granting temporary protection status for 10 years to all Venezuelans on its territory. My gratitude to President @IvanDuque, and to the Colombian people and government, for this historic, generous act.

Recent Executive Order from The US

A few weeks back, the Trump Administration signed an executive order that suspended for 18 months the removal of more than 140,000 Venezuelans who were at risk of being sent back. The move came right before Biden took office.

The US was among the first to show support for Juan Guaido, who stepped in as interim president of Venezuela back in 2019. Biden recently took office and many experts believe he will continue to support Venezuelans by granting a Temporary Protected Status (TPS).