Philadelphia Eagles quarterback Carson Wentz appears to be on his way out. Over the last few weeks, there have been numerous rumors linking him with a trade to the Colts, Bears, and a few other teams.

The Eagles quarterback has a new coach and staff but it appears that the team is looking to get something back and have Hurts or a drafted quarterback run the offense. The recent rumors have pointed to a trade with the Colts, who recently saw their quarterback, Philip Rivers, announce his retirement after a long NFL career.

NBC Sports Chicago reports that Wentz’s desire to play for the Colts, not Bears, is maybe delaying a trade. The sports page brings up a tweet from Jeff McLane, who said this earlier today:

If Colts had best offer, it’s likely a deal would be done at this point. Wentz’s preference would be Indy, which would expedite agreement.

Probable cause for delay. If Colts’ interest is mild, then there is little he could do 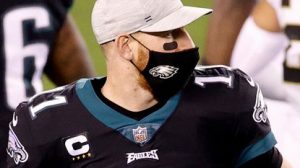 to prevent trade to Bears.

It is unclear what a trade between any of the teams would look like. Wentz currently has a massive contract that he signed some time back. Both teams are in need of a quarterback, especially the Colts. The Bears saw Trubisky and Foles start games during the regular season and after a good start, the team saw a losing streak in which they seemed to be out of the race. The team completed a remarkable turnaround and actually made the playoffs, despite losing the last game of the regular season to division rival Green Bay Packers.

The Eagles started Wentz for most of the regular season but saw a struggling offense during most of the games. In the last few games of the season, the team announced it would be going with Jalen Hurts, a second round draft pick that caused a lot of controversy in Philly since the team gave Wentz a massive contract some time back.

During the season and after, there were reports that Wentz wanted out. Reports say the team is also exploring trades for tight end Zach Ertz. The salary cap situation of the team could lead to a few more moves.

Zach Ertz has been with the team for many years and was an important piece of the Super Bowl run back in 2017. Wentz was also on that team, helping them almost secure the number one seed before going down with an ACL injury in a game against the Rams. Foles started the last few games and the team did enough to secure the top seed. The Eagles then had a magical run in which they had strong performances against the Falcons and Vikings. The run led to a Super Bowl win against the Patriots.

In June 2019, the Eagles and Wentz agreed to a historic move that gave the quarterback a deal worth $128 million, and up to $144 million, with $66 million fully guaranteed at signing and $107.9 million in guarantees.

Wentz has taken the team to the playoffs a few times but the Super Bowl run and the season in which they defeated the Bears after a missed goal saw him watch the game from the sidelines due to injuries. In early 2020, the Eagles appeared in a playoff game against the Seahawks. Wentz played a few snaps before suffering a concussion from a hit by Clowney. The Eagles lost the game 17 – 9.